Artlyst has returned to the Ruskin School of Art, for the BFA and MFA exhibitions 2016, after investigating the school’s ‘Preliminaries’ exhibition, which highlighted the burgeoning talents of Ruskin’s first year; now we explore the graduating artists of this prestigious school, bringing you some of the best work on offer from a collection of young artists soon to tackle the cutthroat environment of the art world.

The BFA show, consists of the works of 24 students, while the MFA consists of 10 students – and another opportunity for Artlyst to bring you a look at the potential art world players of the future from a selection of works employing various modes and languages. 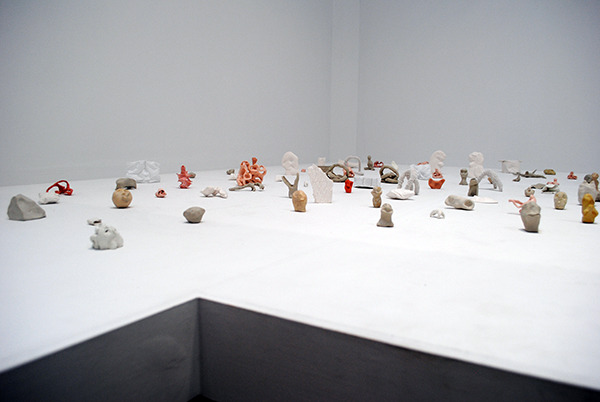 One of the fascinating structures that contrasts and defines the language of sculpture and installation is the relative position of the viewer. With sculpture the viewer exists outside of the universe of the object: separate from the language and narrative of the work. With installation the viewer finds themselves as an intrinsic component, an internal element in that universe – at the heart of the language of the piece – with many variations in between. Mariette Moor plays with that very variation. The artist places the viewer in isolation; at once a part of a miniature installation and separate from a collection of sculptures. The piece, ‘Crack Me Up – Round 1’ is comprised of a sea of miniature works in a white cube space – abstracted enigmatic beings and figures – a field of forms in which the viewer finds themselves at once projected and at the same time separate from. 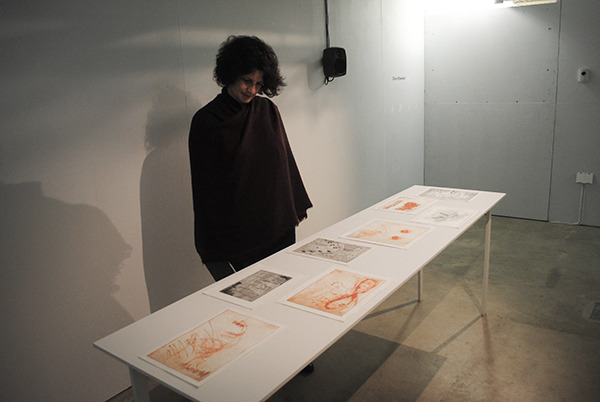 The relative position of the viewer is also explored by Olivia Rowland, with the artist’s work ‘Rupture’, a juxtaposition of traditional languages with the contemporary structure of an installation. Rowland sets the stage with a simple trestle-like table upon which rests a number of traditional etchings. But it soon becomes apparent that there is also an audio element to the work surrounding the viewer: the traditional display of etchings is transformed into an immersive installation, as the viewer is placed both at the heart of a sound installation and separate from the etchings before them, a piece that is simultaneously installation and display. The result is the viewer as intrinsic installational component to a separate poetic narrative. Mirren Kessling’s practice employs a myriad of tools including film, photography, print, and even one-off events in the form of lectures. But here it is the performative aspect of the artist’s work that lends a mature simplicity and a depth of language to Kessling’s photographic works on display. The body is at the centre of the artist’s work as a performative tool, in this instance to create photographic works that create a dialectic between the artist’s identity and works from art history – at least as an insinuation of another transposed identity, if not a direct reference to a particular work from history. Kessling’s photographic piece ‘The Head’ insinuates the pre-revolutionary fashions of Louis XVI, signifying that particular artifice while replacing make-up with a primitive tribal mud. The obfuscation of identity becomes timeless as we perpetually mask our true selves. The artist’s final works are in fact artefacts, records of a performative exploration of identity.

About Ruskin School of Art:
John Ruskin first opened his School of Drawing in 1871, after planning to develop a course for Oxford University leading to a degree in art. Ruskin’s plans to establish a Bachelor of Fine Art degree was finally achieved in 1978, and this became the present honours degree in 1992. The school originally consisted of a teaching collection of more than 800 watercolours and drawings and more than 400 prints including works by Dürer, Tintoretto and Turner.