Tomas Saraceno “On Air” an exhibition at the Palais de Tokyo is definitely one of the most extraordinary exhibitions I have ever seen. A once in a lifetime experience not to be missed if you are in Paris.

Saraceno is fascinated by what is in the air around us: from cosmic dust to sound waves

I attended the opening of the exhibition, where Jean de Loizy (President of the Palais de Tokyo), Rebecca Lamarche-Vadel (curator) and Tomas Saraceno guided the press through the maze in the 13,000-square-meter exhibition space. Together with his team of up to 75 people in his Berlin studio, he has been working for the past 2 years on the Paris exhibition.

The Argentinian architect-turned-artist invites us to share his dream, a dream he has been working on for almost 15 years, including research at NASA in 2009, as an artist in residence at MIT since 2012, working with the Max Planck Society in Germany, and with the Natural History Museum in London. 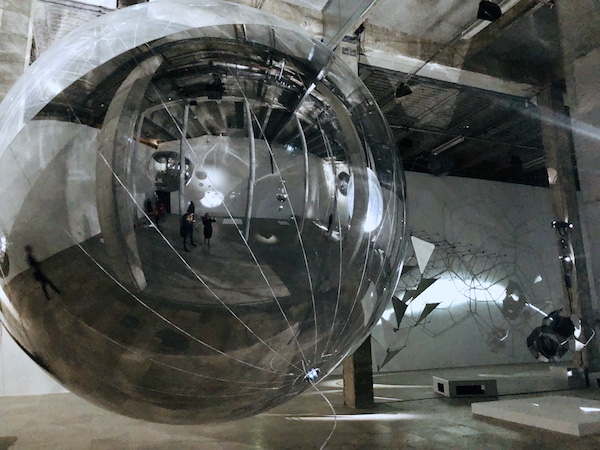 Saraceno has a sparkle in his eyes when he talks about the exhibition. He has a certain “je ne sais quoi” of Saint Exupery’s Petit Prince, contagious enthusiasm and candour. What he is presenting is far more than just a contemporary Art exhibition. It is a political, scientific and philosophical proposal. Art is his medium. As a true visionary, he is connecting disciplines such as astrophysics, engineering, environmentalism, thermodynamics, biology, arachnology and musical composition.
Rebecca Lamarche-Vadel, the curator of the exhibition, compares him to “Marcel Duchamp or even Leonardo da Vinci, who always thought outside and combined disciplines”.

“On Air” is a political manifesto addressing the pressing environmental issues of our time, with an aim to change our society from an Anthropocene to an Aerocene society. The French philosopher, anthropologist and sociologist Bruno Latour, known for his writing on social networks, is one of the key influencers of Saraceno’s thoughts.
With its lighter-than-air sculptures which become buoyant only by the heat of the sun and the infra-red radiation from the surface of the Earth, Saraceno invites us to shift from being “Homo Economicus” to floating “Homos sapiens”, free from fossils fuels. 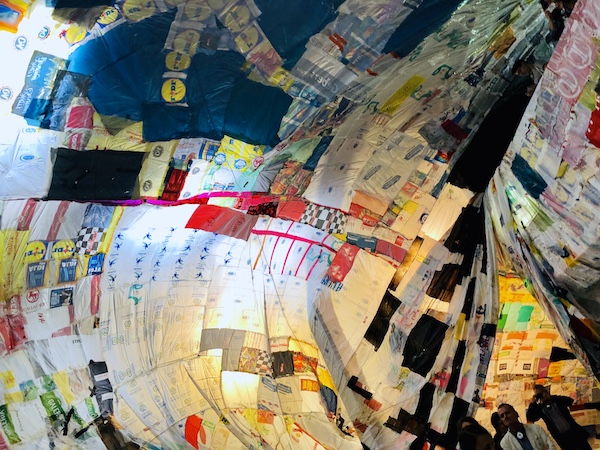 Through arachnids, vibrations and sound experiments as well as aerial cities, the artist is advocating for a radical transformation of our relationship with each other and the planet.

The exhibition starts with “Webs of At-tent(s)ion,” a constellation of impressive spider webs presented as three-dimensional sculptures: the silky homes are works of art in themselves. Like a theatre of shadows, the delicate illuminated white threads glow in the pitch-black room. The 450 living spiders of the Palais de Tokyo have been invited to participate in the exhibition actively. Spider webs are metaphors for the possibility of new ecosystems.

Saraceno is fascinated by what is in the air around us: from cosmic dust to sound waves. He orchestrates ‘cosmic jam sessions’ by transforming into sound the gravitational waves caused by black holes colliding in space billions of years ago. Visitors are invited to participate in ‘cosmic jam session’ workshops and concerts as well as the immersive and interactive installation: “Algor(h)i(y)thms”.

The last part of the exhibition, the aerocene, is dedicated to the “Cloud Cities” floating sculptures, including the community projects of the floating plastic Museum and even experiments with solar-powered human flight. Aerocene is an on-going project. At Art Basel Miami, Saraceno presents his new work “Albedo” to examine society’s dependence on fossil fuels and the natural energies that can be used instead.

I left the Palais de Tokyo wholly captivated by the whole experience which was visually pleasing, intellectually challenging, musically mesmerising, yet highly poetic. As Saraceno himself described it, more than a mere visual exhibition, it is “a synthetic, bodily experience, a journey,” It runs through Jan 6th.