What is movement? Ok, fine, maybe we know what movement is, but how should we think about it? In the medieval period medicine considered movement to equal life, and stasis to be death – a supposed aetiology of the black plague was “stagnant air”, and restoring circulation and movement to the air would solve the plague problem. We still speak about stasis being death. The pianist Noël Lee apparently constantly moved around ‘as part of an endless activity which was either his career or his happiness or a combination of both.’

In-keeping with this idea, Laura Mulvey has written a book entitled ‘Death 24x a Second’, referring to the cinema’s trick of flashing 24 still (dead) frames before our eyes to make movement. Is this movement? And if so, how many frames-per-second is real life (considering our eyes think 24-per-second is enough to look real)? If we ask a Mr. Gilles Deleuze, he would say that movement, not form, is first. Movement is not something pasted on a still object, an accessory to a mannequin that makes it dance rather than sit there. Rather, movement itself gives form to an object, and continuity of movement describes the figure. While the mannequin is dancing, we find the dance and the mannequin inseparable – we can’t tell the dancer from the dance – something can only ‘be’ while it is ‘doing’. In other words, for Deleuze, constant metamorphosis (through movement) is what makes us objects. For everyone else, movement is a succession of separate elements or frames performed by/on a pre-existing object.

Can you have movement without an object, and what would that look like? For me, movement – just movement – looks like the waves made by the wave pool in Mansfield Water Meadows (swimming baths). I would go there as a child and the waves would throw my body around because they were bigger than it. Tony Cragg (as everyone mentions like they are proud of and share in their friend’s versatility) initially worked as an industrial chemist for the Natural Rubber Producer’s Research Association, and as such is probably aware of some intrinsic chemical properties and internal movements of materials. So while I seem to picture movement as pasted on something still – a child being tossed about by waves, being made to feel quite sick in the process and wanting the movement to stop –  Cragg seems to agree with Deleuze when he says that the sought-after experience of his sculptures is that of a child who

is going to have to learn to consider what possibilities it has for change as opposed to changing the material around it, to consider the qualities and the properties internal to itself, thereby changing the demands and experiences it will place on its exterior circumstances.

In other words, I should have considered movement to be a normal part of being in the wave-pool, and changed my ‘demands and experiences’ of the wave-pool by changing the ‘qualities and the properties internal’ to myself. I should have ‘become’ the wave-pool, or let myself move like it embracing the metamorphosing movement, and not have felt sick because I was moving organically too. Movement should have been natural to me instead of me wanting to turn it off. But it is too late for all that now. Germano Celant puts it like this: that Cragg ‘believes that all [a material’s] transformations are also organicistic, that is, cannot be imposed without, but only lived from within.’ Cragg emerged from a very 60s tradition and metaphysical situation in which material itself earned its own individual condition and identity.

Stay with me, I’m getting to it. For the entire time before the 50s/60s material had been something to make a statue out of. Rodin (for example) uses marble to make an image of lovers kissing. Marble doesn’t really get any say in this – it is enslaved to what Rodin makes it depict. A painter uses paint to make a face, in the same way the natural world uses wood to be a tree. You can’t see the marble for the kiss, the paint for the face, or the wood for the trees.

With the advent of pure abstract painting and the so-called ‘material body’, however, you start getting art that is about the materials it is made of, rather than what it looks like. Material, rather than subject, takes centre stage. People start to talk about paint or wood or whatever having its own power, a kind of animism, and if you have ever admired a Rothko painting you have too. When Rothko paints it is only about paint, and what paint can do to a viewer directly without looking like anything. Any psychological impact from a Rothko comes directly from the paint. In the Mona Lisa (for example), the psychological impact comes from her eyes and famous smile. When Cragg was doing his Masters at Wimbledon College of Art in the early 1970s, his tutors introduced him to the work of Giuseppe Penone and Mario Merz of the Arte Povera movement – concerned with using organic materials and connecting the individual and artwork to nature. Cragg has retained their interest in growth-through-material through to the present.

The majority of the work present in this Lisson show is from Cragg’s “Rational Beings” series, which has been going for about two decades now. They are very difficult to describe, looking occasionally like windswept rock patterns, alien caratids (see ‘Accurate Figure’, 2012), rippling cruel muscles (‘Off the Mountain, 2012), a paused waterfall (‘Group’, 2012, bronze), or huge mushroom-caps growing out the side of trees. They look extra-terrestrial, like plants from alien planets that have grown unchecked and unpruned, obeying their own set of outer-worldly needs rather than cultivated or fertilized from the earth. 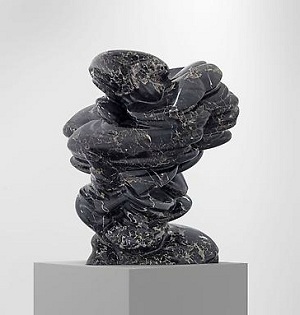 True to Deleuze and Cragg, these sculptures seem to have been made from a kind of organic over-growth which is occasionally frightening/intimidating, and occasionally smooth. There are rounded, friendly edges and sharp, dagger-like points. There are also hints at human faces. Drawings for an earlier work ‘Points of View’ (2007) suggests the shapes have come from human profiles – the nose extended and the head stretched back like it is going by at great speed. ‘Runner’ (2009) slightly recalls Boccioni’s ‘Unique Forms of Continuity in Space’ (1913) but with more distortion, as though Cragg’s unique forms are moving more quickly through space, or are being swept back by a sonic wind. This implied movement makes them look like they do. 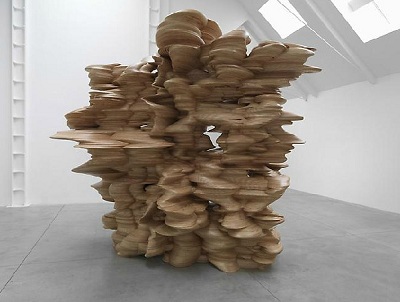 Movement, coming from within these sculptures, gives them form. I’m not going to make the claim that the sculptures move – they don’t roam the Lisson Gallery like inbred dinosaurs – but there is a sense that what Cragg gives us is a snapshot of forms that are moving internally and changing. ‘Orb’ (2012) looks like a plant-brain that is thinking and about to vibrate with its own (sinister?) thoughts and energy. The paused waterfall (‘Group’, 2012, bronze) is just that, or else has been thrown from a bucket and is in the process of travelling towards some deserving idiot, stopping for an instant for Cragg to snatch it into bronze. The enormous masterpiece, again called ‘Group’ (2012, wood) but over two meters tall, nearly 4 meters wide, and made from thin layers of wood, seems in areas to have speed-trails.

But the wooden ‘Group’ is something else entirely. It is enormous, impressive and intricate. The variety of shapes and forms hanging off it give an enormous range of resemblances and characters. It is dramatic in the interactions between friendly-shape and sword-shape, plant and animal, space and material. Sometimes it is rock, sometimes it is fungus. It morphs as you look at it. Cragg has said before that ‘the most fantastic material is the human neuron’ because it is ‘the prime agent of change and determines many forms on the planet’. Cragg wants to find all those forms. Sculpture ‘permits a journey of discovery that gives us a glimpse at the myriad of [sic] forms as yet unseen.’

And this is really the excellent thing about this show, because Cragg seems to finally be able to do this – to imply growth and metamorphoses happening organically that are about to become something else as-yet unseen. He has made the leap from idea-backing-the-artwork to idea-feelable-in-artwork. We can now feel his work possesses a constant internal movement, and a slow organic evolution between forms. Each level of plywood appears to have grown organically up and out of the previous one in a slow change creating all possible forms – movement, like Deleuze said, from inside the figure, in full continuity of movement that describes the figure animistically from within. Or put yourself in Mrs Twit’s position and, as Roald Dahl said:

‘One night, when the old woman was asleep, Mr Twit crept out of bed and took her walking stick downstairs to his workshed.  There he stuck a tiny round piece of wood (no thicker than a penny) on to the bottom of the stick.

This made the stick longer, but the difference was so small, the next morning Mrs Twit didn’t notice it.

The following night, Mr Twit stuck on another tiny bit of wood.  Every night, he crept downstairs and added an extra tiny thickness of wood so the end of the walking-stick.  He did it very neatly so that the extra bits looked like a part of the old stick.

Gradually, but oh so gradually, Mrs Twit’s walking stick was getting longer and longer.

Now when something is growing very slowly, it is almost impossible to notice it happening.  You yourself, for example , are actually growing taller every day that goes by, but you wouldn’t think it would you?  It’s happening so slowly you can’t even notice it from one week to the next.

It was the same with Mrs Twit’s walking stick.  It was all so slow and gradual that she didn’t notice how long it was getting even when it was halfway up to her shoulder.’

To us, like to Mrs. Twit, the sculptures have risen up with a form-giving movement of their own. ‘Group’ has grown organically, by itself, to over 2 meters tall. I can’t imagine how.