I visited the white, white cube for the Emin show a day after the people-jammed preview opening. I’m a little allergic to crowds so rely on the Facebook grapevine for a feel of how sardine-packed the gallery felt. With queues stretching around the block, it was one of London’s key art events. Today there’s space and room to appreciate the ghosts and the blood of Emin’s gestural bodies.

‘Tracey Pop Tart’ a friend writes in passing while mentioning celebrity artist shows that drag in huge crowds, those that pull beyond the reach of most contemporary artists, attracting not just the core of the usual art-exhibition-goers. Emin is one of the few artists who we know stirs conversations in bars and buses, on seafronts and in libraries. She’s abused as well as revered, although today struggling left-wing artists are less likely to talk about her bed and boyfriend but to castigate her as a ‘Tory bitch’ and for being out of touch with the people she appears to speak for, the disinherited, rootless, disorientated, disenfranchised class.

Emin has always had a special teenage place in her heart, in her art, with crossed out words, delicate uncertain lines of monoprints and canvases with the focus on the selfie and her own body. Look at me, I’m so embarrassingly miserable. Can you see the pain inside me? It’s just the pain that any woman can feel who isn’t transported on high by love and belonging. I’m a woman alone with her own body, invalidated by a man. Embarrassing, isn’t it.

The exhibition opens not with a picture but with words. A prose poem, of a type, flash facts. A religious witnessing to a night vigil. This is a text on insomnia, not painted, not affected, transformed with brush strokes but just printed like a poet’s words. It’s personal. It’s real. And it’s imaginative. A little bit of creative writing evoking the nightmare of the coffin. And so we’re set up. The body is the coffin. Inside there’s us, carried in our bouncing bones, waiting for the day to break like a god who can save us from ourselves.

And then I pass straight into the insomnia room. Traceys everywhere, huge selfie-Traceys. Tracey in bed, of course, where else, Tracey at night, in the light, her portrait staring unsmiling, with those keen eyes at me and at the others gathered here. She circles us like judges. We are being watched, assessed by sleepless Tracey’s beady eyes, her intense night thoughts boring into us like a gimlet. It’s unnerving. Theatrical. It’s a kind of kangaroo court. Did we dismiss her? Look at her. She is Rembrandt a million times over, in siennas and umbers. She looks at you. In another flash I imagine her standing in the middle, all the Traceys staring at her. It’s like science fiction. As if she is in the middle of a compound eye of a predatory insect. Weird. This was supposed to be a room about vulnerability. 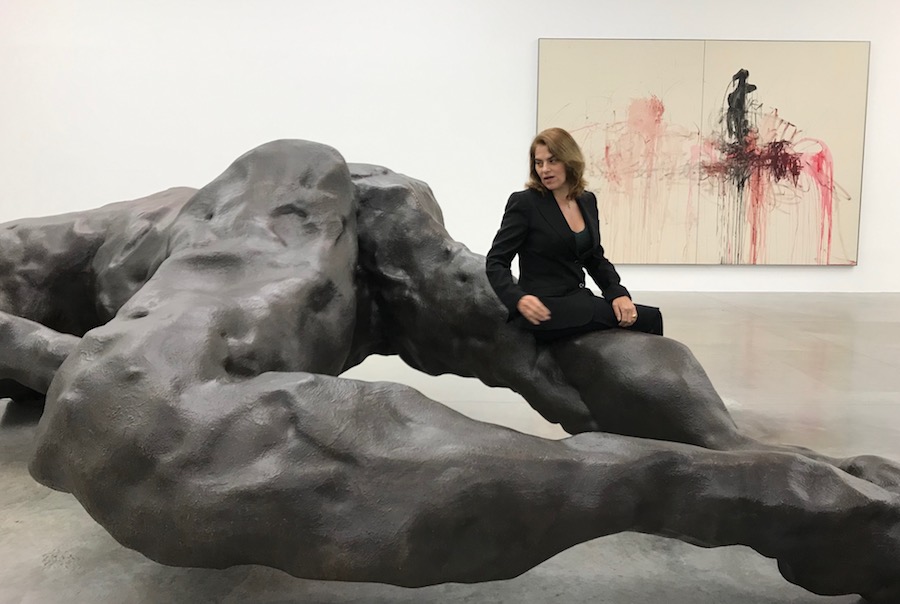 Walking around I’m drawn now into rooms of grief, canvases of grief, huge bronze self-portraits of grief. The empty womb that the woman draws out of herself and presents. It’s an offering, it’s a witness to pain, it’s a remembrance gesture. Like those renaissance portraits of Jesus’s Marys, fainting and collapsing, the women here are sad and broken but it does not stop them from performing for us. They carry out grieving so that we know how to cry and so that we know how to pray. They, of course, are all Traceys. She multiplies herself so she can show how to portray emotion in the different poses. Lying naked on the bed. Collapsed on the floor, head pressed against the cold of the earth. Long legs, impossible to tuck away neatly, still elegant but gone beyond dignity. I don’t touch the spread bronze but I have the strange idea that I can feel the sweat of hot despair on its skin, the sadness that ruins appetite.

Emin’s signature, sad, scribbled canvases are spidery pink and red. Nothing overworked. Just worked over. The nudes cannot be too defined for the inner character is trembling in a vale of emotion. Painted conventionally if scruffily and gesturally, in the unfinished tropes of the twentieth century, they could have been painted with placenta and umbilical cord but there’s no need. It feels like they have been because paint can convey that in the hands of someone who knows what they are doing with a brush and a line. 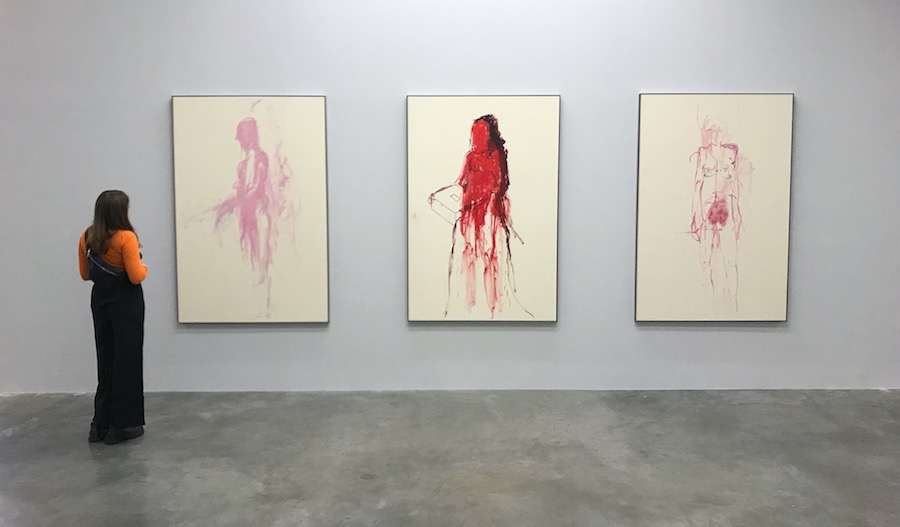 Then I pass into a more somber mood. Blue, Catholic. A procession with a casket. This is Emin intimate with the remains of her mother. First, she waits, nurse and nun at her mother’s bedside for the last moments. And the painter’s line goes blue, it goes grey. Then her mother passes and the loneliness reveals itself. She plays a part she had not prepared herself for but she opens herself up to feel every moment, carrying the box, taking the ashes. Small paintings on paper in blue line show how she carries the casket.

Trying to bring back the dead, the Ouija board comes into play. ‘Can You Hear Me?’ The ghosts are getting stronger, and the living is beginning to slip away in paintings that recede behind thin wash into the obscurity of the canvas background.

Where are the men? There is an indistinct man lying in bed beside her in ‘I Made You Happen’. But I see the men behind the curtain, sitting in the auditorium watching ‘How it Feels’ (1996) converted from Hi8 video to digital. The men are real, washed by cinema light, their faces upturned towards the screen. They look enraptured like those crouched by the cross with the light of Christ like they are Mary Magdalen, they are Mary Mother of God, they are the disciples witnessing the importance of the sufferer, lit by the radiant glow of female pain. That is the image that comes to me as I stand on the outside of the cinema room like an unbeliever, exiled from the common experience that will be mine so long as I wait for the appointed time in the cycle. But I turn away and walk again through the fortnight of tears, walk the corridor passed the acrylics on paper and canvas until I reach the internet where my friend, the artist Andrew Stys has written,
Tracey Emin is undoubtedly a genius gift to this Brexshit environment.

Britain didn’t have a Basquiat. Well, Mad-Tracey-from-Margate-Tory-Bitch will do. She’s awesome and I LOVE LOVE LOVE what this woman is doing. I wish her many creative years while staying alive.