“These landscapes are the foundation of my work.”

Ugo Rondinone explains as the last minute details of his current show are being attended to. “ I make small drawings with a radiograph pen. In the beginning, I would use projections, but now I mix the drawings and projections together. I make all the details in daylight.” Ugo is referring to the seven monumental ink on paper pieces, each enigmatically titled with the German titles of the day, month and year, but written with no spacing, so the stream of words maintains an undecipherable mystery.

“I use a tiny brush with Chinese ink, replicating a woodcut. When you see them up close, they look more abstract. It takes me a long time to finish one – five or six weeks.”
The Gladstone gallery has been transformed into a meditative cocoon, walls painted a soothing grey tinged white, and the majestic landscapes are paired with silvered aluminium casts of 19th-century windows.”It’s a juxtaposition of 19th-century windows that I have collected, with German Romantics. The windows are built during the same time of German Romanticism. I found many of these old windows upstate. Windows are a Romantic symbol of expansion and unfulfilled desires. Over time, I will cast sixty-two windows.” “ I started with these paintings in 1990. Airbrush is anonymous, but these are very personal. The Sun paintings I did were titled after time and date. The Land works looks to the past, the Target paintings to the future. Using these titles for the paintings shows the space, the time markers as an entity.” “I wanted to do a classic show of paintings and sculptures, not an installation.” 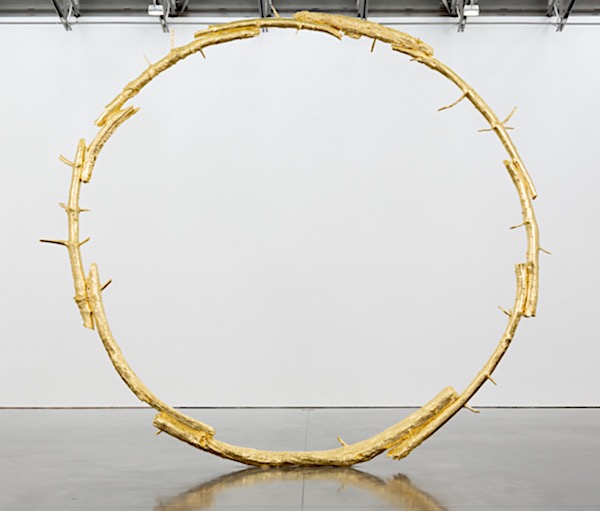 “big mind sky”(2007)is a cast bronze patinated keyhole, the empty abyss blowing a gentle and unexpected breeze. The artist’s plaster handprint in the middle of a wall “twelve sunsets, twenty-nine dawns, all in one,”(2008) is the first work the viewer encounters upon entering the gallery.

Rondinone, an Italian raised in Switzerland, does not share the American fear of the wild. Early American settlers viewed the woods as something dangerous, with unknown native people and ferocious forest creatures. Rendered with calligraphic intensity, these uninhabited landscapes depict the forest as both shelter and refuge. Rondinone heightens details with seductive beauty, from striated tree trunks to gnarled branches and gracefully intertwined leaves. Primal manmade structures suggest a fairy tale ambience, and obsidian caves are more mystical then menacing. The dark crevices and winding paths invite exploration. These monumental landscapes retain an intimacy, unlike grand American panoramic nature paintings, which depict nature from a safe distance. If the spirit of this show pays homage to German Romantic artist Caspar David Friedrich (1774-1840), the actual renderings are akin to French artist and engraver Rodolphe Bresdin and English painter Samuel Palmer. The show itself named, “drifting clouds” is taken from a title used by Friedrich for one of his paintings, and the metal window casts are each named after one of the German Romanticist’s own works.

Visual depth transcends an abbreviated palette. Gestural and flowing obsidian ink emphasises pointillistic illumination, capturing the dappled sunlight of a gorgeously disordered arcadian landscape. Rondinone depicts an ennobled nature, unpolluted by humanity, a space of calm and contemplation. Sublime and spiritual, these are images of prodigious silence. Look carefully beyond the towering firs and dark woods, to glimpse the weightless footsteps of hidden forest sprites.

Gladstone’s 21st Street location is dedicated entirely to a massive sun sculpture, which can be read as the show’s centrepiece. Cast from bent and overlapping tree branches, twigs intact, the single gilded bronze ring appears to hang in the air. I first saw this piece in the artist’s Harlem studio, bare barked and commanding. In its present golden incarnation, this sun retains solar power and possibilities, with the added layer of an eloquent emptiness that echoes black holes and infinity itself.

“drifting clouds” three distinct and equally powerful bodies of work were perfectly timed to open on the autumnal equinox, a gorgeously sunny and crisp day. This intimate celebration reanimates humanity’s universal exploration of transcendental nature herself.