Exhibitions at Annka Kultys and Cell Project Space reviewed by upcoming curators who are students of Sarah Sparkes’ course How to be an Independent Curator course at Central Saint Martins University of the Arts London.

Annka Kultys gallery is a compact and clean space, the whitewashed walls a perfect backdrop for her latest showing of Aaron Scheer’s colour-popping digital paintings. Based between Berlin, Germany and Gothenburg, Sweden, ‘FINAL_007 (02)’ marks Scheer’s first solo exhibition in the UK and is on view until March 2 2019.
Scheer works with a range of digital devices, creating his works using the screens of his phone or laptop. The collection of seven works printed on paper continues his ongoing exploration of digital media, using painterly techniques to create artworks. To allow the visitors to have an understanding of his technique, the gallery included in the exhibition an insightful video created by Scheer himself, showing how he composes his digital, colour-saturated palettes by swiping and screenshotting the screen of an iPad. Through layering carefully composed monochrome images or desktop folders, sometimes manipulated using brush strokes effects on Photoshop, he creates vivid compositions with vibrant colour contrasts. 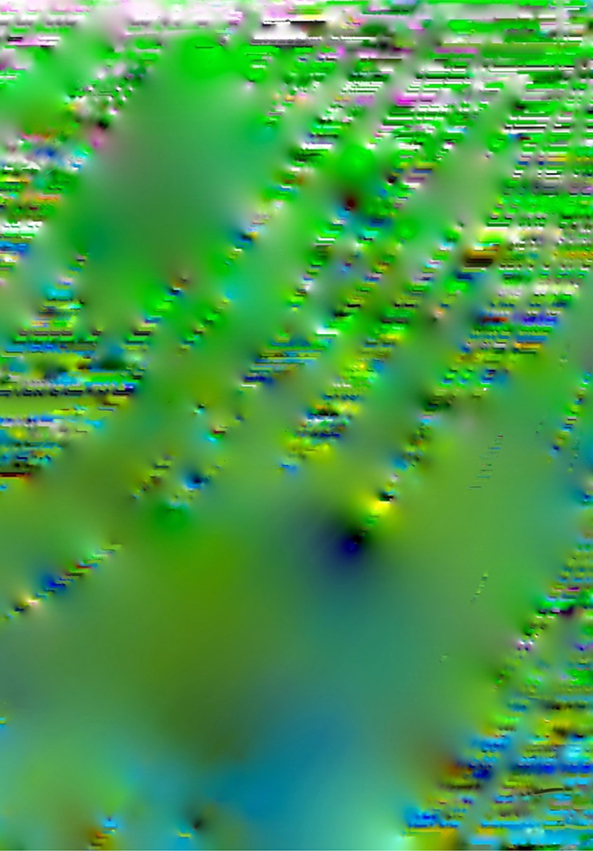 On the surface, these works are pleasing just to look at because of the interplay of texture and colour, but there is a deeper meaning behind the German-born artist’s modern creations. He is interested in the relationship and cross-over between humanity and technology, with a focus on the ever-increasing connection and interdependency between man and social networks. The vivid blue of the Rothko-like painting Digital Archaeology V, or the bright green in the background of Facbook_7aec5af, both on view at the gallery, remind the viewer of apps such as Facebook and WhatsApp. Through applying a classical art compositional approach to digital mediums, he can explore the challenges of our ever increasing digital world, from perceptions of reality to big data and automated production.
As illustrated by the curator of the gallery, contact between Kultys and Scheer started a few years ago, when the German artist connected with her online. She then decided to include his artworks in the group show ‘CACOTOPIA 03’, an annual exhibition featuring the works of five recent graduates from art academies that ran from December 5, 2018, to January 19, 2019. Following the success of that exhibition, Scheer became one of the new artists represented by the gallery.
Scheer’s exhibition is contextualized in the gallery’s history, which has focused on multimedia and digital art since its opening in September 2015. Located in the borough of Hackney, in east London, it encourages artists to bring their digital artworks to the gallery and functions as a point of contact with the press and collectors. For anyone interested in the world of digital art, it is worth a visit.

With minimal elements and masterful use of sensory components, Aiello and Boyd create a surprisingly emotional journey through domestic tragedy and a lost American heartland.
The exhibition begins with a motion activated speaker at the doorway playing excerpts of Christine Blasey Ford’s testimony on her recollections of assault at the hands of now Supreme Court Judge Brett Kavanaugh.
Blasey Ford’s voice intones unemotionally describing rooms in a home: ‘a stairwell, a living room, a bedroom’ on a loop and we are immediately placed into both a space of trauma and the mundane suburban rooms where these life-changing blows regularly play out. 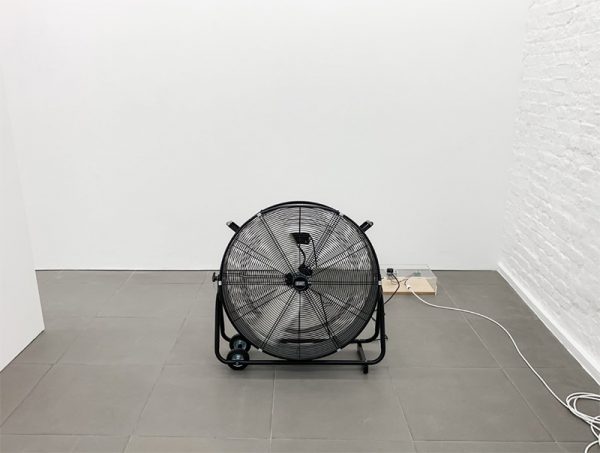 Juxtaposed against this is a large industrial fan blowing endlessly. Being lucky enough to have the whole exhibition to myself and my writing partner, this background (‘white’) noise paradoxically seemed to make the space quieter and eerier.
The exhibition is powerfully evocative of post-minimalist tropes, built around two empty right-angled ‘corners’ which the artists state they placed to create a delay in the space. Felix Gonzales – Torres is an obvious inspiration. However, Boyd and Aiello skilfully inject a palpable sense of dread onto Gonzales- Torres dreamlike sense of loss.
Along the left-hand side of the wall, placed singly or in groupings, A4 sized prints of either shot taken from the transit of houses that looked to my eye American Mid West suburbia or framed household furnishing fabrics, presented like evidential specimens.
However these photos are captioned; ‘One person goes to the bathroom, one person follows them’, ‘One or two people are left alone in the living room’ or ‘In the living room one person decides whether to answer the door’, amongst others. This seems like the detailed yet often mundane reports that are made to piece together events leading up to a tragedy. Or perhaps I have just been watching too many true crime documentaries?
It’s notable here that the only human faces we see in this grouping are a reproduction of a high school yearbook. One of the female students has had her image defaced with the words ’SLUT’.
On the other side of the exhibition is a screen playing inane chat shows cut with shaky video footage of (I assume) defunct machinery being manically put together or taken apart. This led me back to those mid-western images and an allusion to loss of manufacturing: literally the rust belt.
The final works in the exhibition are a series of wax moulds or reliefs made from a cooking grease sourced from a facility that collects waste grease, cleans it and sells it on to refineries to be transformed to fuel. Although linked to the domestic in material this work also hints at an alternate ‘green’ industry, one that could perhaps alleviate the economic decline of America’s mid-western states.
To me, this exhibition seemed to be a subtle allegory for trauma, whether that be sexual, economic or environmental. It is an understated exhibition but one that is all the more rewarding for pulling its oblique meanings apart.