Urban Impulses, the new exhibition at The Photographers’ Gallery here in London, exemplifies the reasons why contemporary photography now so often seems to take the lead over contemporary painting. It is more directly relevant to the world that we, the viewers, inhabit.

Photographers have been witnesses to it all – ELS

The show is about Latin America, from 1959 to 20i6, and is divided into two parts, each on a different floor of the building. One section is called Shouts, and is directly political, in a way now familiar from the whole development of Latin American art, from the mid-1920s until the present. As the curators state: “social movements, daily resistance to oppression – photographers have been witnesses to it all.”

The other section is entitled Pop-Ular and is a testimony to the rapid urbanisation of Latin America. The catalogue introduction to this claims: “The images provide testimony to the violent transitions undergone by tens of millions of people who, in less than half a century, have moved from their rural traditions to the bustle of the metropolis.”

Given that this is the focus, it’s not surprising to find that several minor Latin American nations get left out. Plenty of images from Brazil, from Mexico, from Colombia, from Argentina, from Chile, from Peru from Venezuela. Also, from Cuba. Nothing from Bolivia or Paraguay, More surprisingly, nothing from Uruguay. 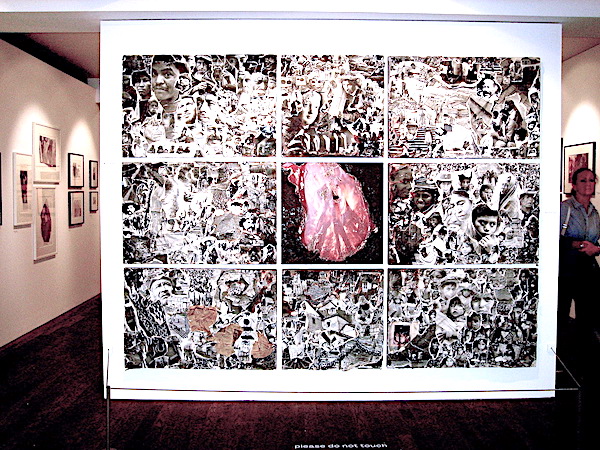 The Shouts section offers a more familiar image than the one devoted to Pop. The very first image you see sets the tone. By Fernando Bedoya, it is a satirical portrait of Pinochet, the Peruvian strongman, glaring out at you through dark glasses, which offer a pair of skulls rather than any glimpse of eyes. This use of collage, often in much more elaborate versions than this, is typical of much of the work on view. The very most important item on view is a wall-sized polyptych by Enrique Bostelmann of Mexico which consists, as the catalogue tells one:
“Of torn, burnt and discarded darkroom materials, collected over the years by the artist, arranged around a photograph of reddish embers displayed against a scorched background. The dynamic composition depicts a motley crowd of peasants, children, penitents and revolutionary heroes.”

Other photographs, however, are immediate records of events, for instance, Eduardo Longoni’s record of The Battle of the Plaza de Mayo, Buenos Aires, 20 December 2001. What this tells you is: “This happened – I was there.”

The Pop-Ular segment of the show is less consistent. Some of it, such as Pablo López Luz’s images of stucco relief work imitating Inca masonry, refers back to the remote Latin American past. Quite a lot, as the section title suggests, is indebted to the Pop Art of the United States, filtered through Latin American sensibilities. The graffiti movement hadn’t hit the region as yet, or – if it had – the photographers selected for the show hadn’t fully noticed it. You can see the impulse stirring in Augustin Martínez Castro’s image S hall behave Syrup? Of ca. 1980, which closes this part of the shoe. What it offers is not graffiti, but tattered lettering from posters and newspaper fly-sheets, clinging disconsolately to a wall. Where graffiti entirely exist in this section, for instance, in Juan Travnik’s image of a dilapidated building, made in Buenos Aires in 1985, they are minatory signs of economic collapse. The photographer is the witness, not the creator.