Vanessa Bell, (30 May 1879 – 7 April 1961) the creative bohemian matriarch, artist, co-founder and muse of the Bloomsbury Group has her first major exhibition in London at The Dulwich Picture Gallery. Arguably undervalued by the public and overshadowed for decades by her sister Virginia Woolf, this is Vanessa’s chance to shine. The exhibition is expertly curated by Sarah Milroy and Ian A C Dejardin (Co-curator and Sackler Director of Dulwich Picture Gallery), his parting gift to the gallery before he joins the McMichael Art Collection in Canada as Chief Executive in April.

The paintings, photographs, sketchbooks, Omega Workshop textiles and home furnishings by Bell are displayed in individually themed rooms which could make the exhibition feel disjointed, however in this case there is a cohesive thread. The pieces are hung and displayed in relation to each other and form a concise developmental map of Vanessa Bell’s artistic and personal journey. Meandering through the body of work one experiences Bell’s love of colour, pattern, form and continual rule breaking. Vanessa negated her beauty and that of her subjects often not painting conventional features at all, preferring to concentrate on composition or pattern. She was connected to the art world having been taught at the Royal Academy and Slade schools by John Singer Sargent and Walter Sickert amongst others, whose influence is evident in her very early work. However, Bell appears to spend her life reacting against the safety of their teaching preferring to associate herself with revolutionaries and rule breakers. She was groundbreaking but rarely discussed her work in public, she once wrote;  “I do not think it matters whether one agrees or not as long as one is forced to think.”

“I do not think it matters whether one agrees or not as long as one is forced to think.” – Vanessa Bell

She knew many prominent artists personally including Picasso and Matisse whose love of pattern and colour was a huge inspiration. Vanessa Bell’s brush strokes slash the canvas with marks and shapes in colours that were rarely seen in London at this time. Much of her work is regarded as unfinished because of the empty spaces and bare canvas. 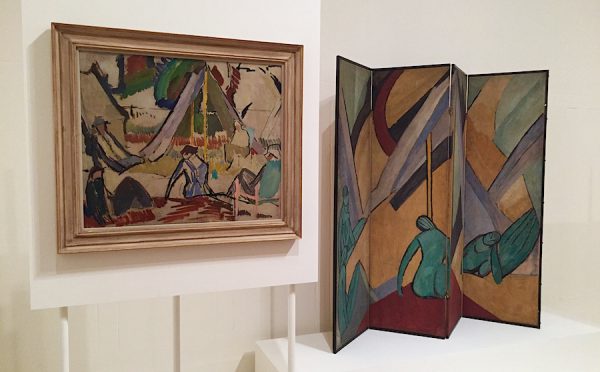 There was no doubt that she was an artist and reactionary woman, a life-long pacifist who rebelled against convention in all areas of her life. There are over a hundred works displayed in this exhibition which has been taken from private and public collections from around the globe.

Born into intellectual and artistic privilege in London, Bell makes a stand against First World War conscription and escapes to Charleston House, East Sussex with her husband Clive Bell and several members of the Bloomsbury Group. Vanessa and Clive had two sons together at Charleston, Julian, and Quentin. Here they lived a wild, communal, bohemian life, picking fruit, making art and intellectualising. Vanessa and Clive had an open marriage. Together with Vanessa the group comprised of philosophers, artists, writers, economists, politicians etc including Duncan Grant, Roger Fry, John Maynard Keynes, E.M. Forster, Desmond MacCarthy, Lytton Strachy, Leonard and Virginia Woolf. Virginia and Leonard Woolf took a house nearby. Vanessa was the female powerhouse behind the Bloomsbury Group, Duncan Grant was her male counterpart. She fell in love with Duncan when she saw his reflection in a mirror and they had a brief liaison which culminated in the birth of Angelica, Vanessa’s third child. The couple lived together in the house until her death in 1961.

There were numerous open romantic affairs, some homosexual, some bisexual, most life-long and all enthusiastic between the men and women who made up this interchangeable set of friends. All of this fuelled their creative endeavours. They were the ‘Punks’ of their generation fiercely upholding their bold experiments in art, life, and love. It was said they were “a group of people who lived in squares and loved in triangles.”

Vanessa Bell’s fundamental importance in history as a woman artist and innovator is displayed with boldness and strength here at Dulwich Picture Gallery.

Patti Smith and Vanessa Bell come together for the first time in this small but perfectly formed exhibition. These two artists have both worked throughout their lives against social convention to produce highly individual responses to their worlds. Smith has courted a long time fascination with the Bloomsbury Group and has been photographing the house and surrounding area for several years. In this joint exhibition, she has seventeen intimate yet highly evocative black and white images on show. The photographs are small vignettes mostly of the interior and exterior of Charleston house. To the viewer they conjure an eerie document of empty spaces where family, artists and great thinkers once flourished, Smith appears to seek refuge in the solitude she depicts. Vanessa Bell’s photographs, by contrast, show a past life rich with memories and inspiration. The private life’s of the flourishing Bloomsbury years. On public display for the first time are shown Bell’s photograph albums from her early life together with intimate portraits of her children and family and friends. There are rare glimpses of the Bloomsbury artists at work combined with a fascinating insight into how life was lived in Charleston.

“Art was a part of everyday living. Their cups and saucers were designed by themselves, their utensils, the wallpaper, tapestries. When I first came here I found it just like home […] I felt a real longing to document this place in the same manner that I document my own home because it is very much how I live: books everywhere, things that seem very humble, very sacred, a simple wooden box, a shell, a paint tube – everything has significance.” Patti Smith on Charleston