Venice, the Pentland Hills, Prince Charles?” They may not have a lot in common, but all have provided Vicky Crowe with significant inspiration. They also encapsulate her three main concerns: still life, landscape and portraiture. That she excels in each is a cause for admiration and astonishment!

Crowe is among Britain’s most distinguished artists. Last year a major survey of her portraits was the main Edinburgh Festival show at the Scottish National Portrait Gallery. Now a retrospective, VICTORIA CROWE: FIFTY YEARS of PAINTINGS fills four floors of Edinburgh City Art Centre with over 150 pictures, a centrepiece of this year’s Edinburgh Festival. It celebrates five decades of immense creativity. 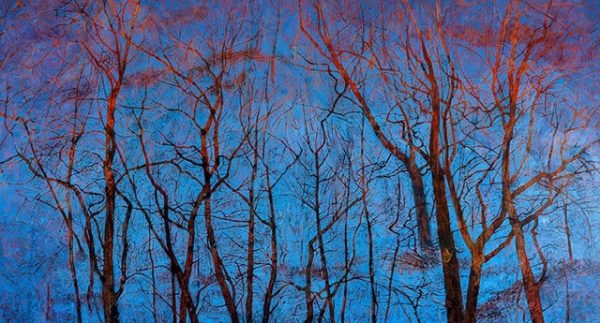 I first visited her studio high in the Pentland Hills in the 1980s. Her famous series, “A Shepherd’s Life” began there in 1975. Through all weathers her elderly neighbour Jenny Armstrong was a key figure, feeding her lambs and hens in harsh snow, gales or rain. Much of what we recognise in Crowe’s individual and characteristic style blossomed here.

Crowe is a superb draughtsman. Keen observation is mixed with complete abstraction in same painting. Her vital concern is always for the painted surface. She weaves her magic with glorious multi-layered strands of seeing. Combining marks and texture with fragments of mirrors, windows, reflections, and often juxtaposing dawn or dusk, interior and outside worlds, she creates a powerful symbolism.

With Jenny, this involved a cottage and hillside; later, drawing on the natural world, her garden and its winter trees. In Venice Crowe merged distant lagoons and renaissance profile heads with lustrous, shimmering abstract shapes.

Venice now plays a significant role in her work, but surprisingly, her first visit only dates from 1998 when she was already 53. She fell for this enticing city in a big way. By 2003 she and her husband Mike had bought an apartment on the Giudecca, the small strip of the island a concise trip across the broad Giudecca canal, where their terrace provides spectacular ever-changing views and vast dramatic twilight skies across the water to the Zattere promenade. Here on their island, away from St Marks Square and tourists, fading flaking paint, crumbling stone, narrow alleys and local cafes tell of the real Venice.

Inspired by these surroundings, Crowe’s works began to feature a palimpsest of collaged tissue, scraps of torn paper or gold leaf, so that her pictures have a worn, ancient, abraded air. She had always included ‘powerful objects and artefacts’ but now dried, pressed plants made their appearance along with insects and flowers, creating an excuse for beautiful outlines, luscious colour and rectangles of fragile gold and silver inscribed with glowing calligraphy, texts, and mysterious images.

Crowe’s work is immensely tactile but also full of shadows and deep emotion. Her life has not been easy and she has fought hard to retain “all that is good and eternal and true, which must somehow be honoured and held on to.”

Recently music has played its role. Her portraits commissions of notable, figures like physicist and Noble Prize winner Peter Higgs, botanist David Ingram, psychoanalyst Winifred Rushforth, the poet Kathleen Raine, Prince Charles and many others, expanded her reach and knowledge. A beautiful portrait of composer Thea Musgrave has led to more music. Collaborations with singers and musicians using her images on film as a setting for Snape Maltings or the Wigmore Hall have proved ‘transformative.’ Important tapestry commissions for London and elsewhere at the iconic Dovecot studio, all have enriched her life and opened up significant new avenues. Visual expression of abstract concepts

It takes courage to explore new things. Way back she gave up London and the Royal College for Scotland. In 1995 the tragic death of her son Ben from cancer inevitably changed her attitudes. She told me then “I can attack a canvas; throw in colour, contrast, and compositions I never dreamed of. I’ve gone through some kind of doorway.” Her work gained assurance and also an ability to create an extraordinary visual expression of abstract concepts.

The show begins with work from 1963, characteristically a lone tree. It ends in 2018 with a luminous gnarled skeletal hazel tree; Crowe’s favourite waxy church lilies set against an intense blue winter sky and, my choice, “Venetian Mirror with Remembered Landscape”. In the book accompanying the show, Susan Mansfield describes it thus – ‘an exquisite image. The misty silvered glass, already antique, perfectly embodies the half-light of memory; The whole picture is a paradigm of this fascinating crossover between light, vision and memory, but here also of place, for the image combines Venice with Scotland’s Pentland Hills, the six panes reading like a polyptych.’

Half a century of hard work, years of teaching at Edinburgh College of Art, dedication to art history coupled with the integrity of purpose, these are some of the factors which have created this exceptional, must-see exhibition, a memorable centrepiece for Edinburgh Festival 2019.