Tate Britain has one very good reason to offer us a Vincent Van Gogh show, which is that it is sure to raise attendances at an institution fighting to get them. It’s the upstart twin, Tate Modern, that is now Britain’s most visited public collection. In attendance figures just announced (on Artlyst) Tate Britain isn’t even among the top ten. Van Gogh may do something to change its ranking.

It is hard to know yourself. However, it is not easy to paint yourself, either – Vincent Van Gogh

Yet at first sight, one wonders what relevance Van Gogh has to the story of British art? It’s true that he lived in London in his youth, but that was before he decided to become a painter. There is no work that can be assigned to his time here. The surprising answer is that Van Gogh’s links to the British art world were pretty close. The art he saw when he was living in London had a big impact on him, and what he achieved had a substantial influence on British artists, though chiefly after his death. The new Tate show makes a strong case for looking at his work in a British context.

The story it tells is not, however, a completely comfortable one. While he was living in London Van Gogh saw and admired the work of British artists such as Constable, Bonington and Millais, who form part of our national story, but what he really responded to were the British Illustrators of the time. Plus foreign artists in this category, such as Gustave Doré, whose prints were also available to him. Despite his lack of resources, Van Gogh formed an extensive collection of prints, around 2000 items. Many of these survive in the Van Gogh Museum in Amsterdam, and some are on display at the Tate. Many of the British artists he admired, Frank Holl and Luke Fildes for example, remain quite obscure today.

These admirations help to place Van Gogh’s earliest work within a framework of artistic social realism that bears an eerie resemblance to what is happening in the visual arts right now. This current has in fact run particularly strongly in contemporary British art, as opposed to what is happening in the visual arts elsewhere. The poor, the dispossessed, the socially excluded formed a large part of Van Gogh’s subject matter before he achieved the full intensity of vision for which he is now known. This empathy was, in turn, rooted in what he learned during the years before he became an artist, when he was living and working in Britain, first as a junior employee of the Goupil Gallery, then as a preacher and teacher. The show methodically sets out the case for this, shifting one’s focus from Van Gogh’s later period, when he spent some time confined in an asylum for the mentally ill. By that time his focus had shifted to a search for his own innermost self. In the course of a painting career of just ten years, he painted more than forty-three self-portraits. One is on the cover of the Tate catalogue. 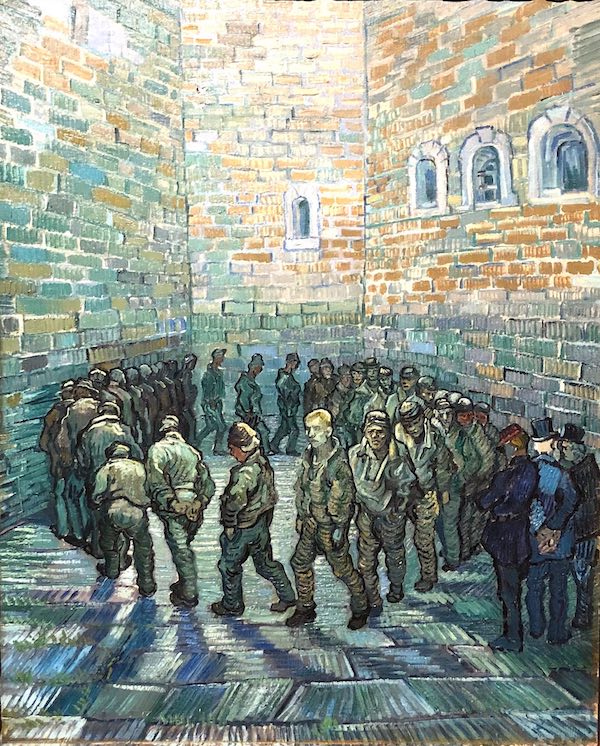 “People say, and I am willing to believe it.” Van Gogh wrote to his brother Theo, “that it is hard to know yourself. However, it is not easy to paint yourself, either. The portraits painted by Rembrandt are more than a view of nature; they are more like a revelation.”

It is this self-revelatory element that is basically missing from the work of Van Gogh’s British followers, which forms a large part of the second half of the show. Are a large number of notable names are there: Spencer Gore, Frank Brangwyn, Christopher Wood, Winifred Nicholson, David Bomberg, Matthew Smith. It concludes with three huge canvases by Francis Bacon, painted in 1957, when he began to get fed up with doing Popes and wanted to find another subject to mythologise. They represent Van Gogh on the road to Tarascon, paraphrasing a now destroyed canvas by Van Gogh himself.

Van Gogh paraphrased other artists’ work surprisingly often, as the current exhibition demonstrates, but these vast rhetorical works by Bacon do him no service – except to demonstrate how much, and how mysteriously, he exceeded even the grandest of his disciples.