The now very senior Wayne Thiebaud (b. 1920) has often found himself classified as a Pop artist, largely because a large part of his subject matter – still lifes of commonplace objects (in his case often items of  mass-produced food) – overlaps with the kind of things that members of the American Pop movement chose to depict. He has had, in the earlier stages of his career, direct experience of the advertising industry, and this, too, has tended to reinforce the idea that this is the way his work should be categorised.

This approach involves a whole series of misunderstandings. It is true that Thiebaud has declared that he sees no real difference between so-called ‘fine art’ and commercial art. He has, however, stated that he dislikes Andy Warhol’s work, which he sees as being ‘flat’ and ‘mechanical’. He would prefer to be seen as ‘just an old fashioned painter’.

Despite certain historical links – in 1962 Thiebaud was included, alongside Lichtenstein, Warhol and Dine, in one of the first museums shows to recognise Pop – New Painting of Common Objects, curated by Walter Hopps at the Pasadena Art Museum – it is I think pretty clear that his work is not, in fact, of a Pop sensibility. 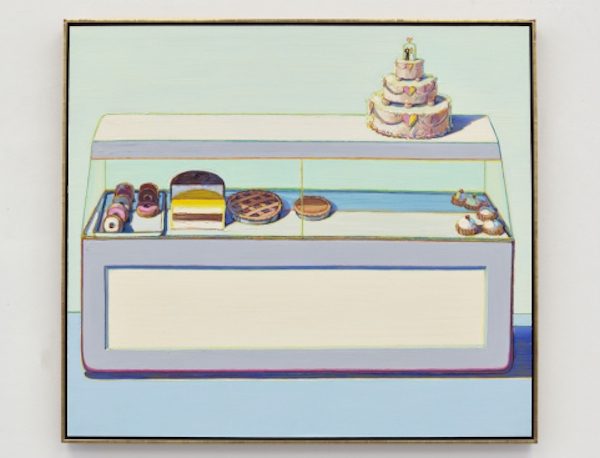 The new museum-quality survey of Thiebaud’s work, at White Cube, Mason’s Yard. Offers a good opportunity to reassess him. It includes plenty of paintings of other subjects – landscapes and portraits – in addition to his characteristic anti-gastronomic still life paintings of the kind of food that is better looked at than actually put in one’s mouth: Cherry Topped Desserts, anyone? There is also a wonderfully baleful image of Two Wedding Cakes, guaranteed to stop the greediest in his or her tracks. Despite the presence of diminutive brides and grooms at the top of these two ziggurat-like structures made of icy-white sugar, you could see them as emphatic warnings against ever venturing into the perilous territory of conventional matrimony.

The way one looks at works of art – or at any rate the way in which I find myself looking at art – is often affected by things quite recently seen. In this case, by, of all things, the current Giacometti retrospective at Tate Modern.

What struck me at Tate Modern, in the galleries given to Giacometti’s later work, was the distancing effect. The stick-thin figures that Giacometti was then making seem to move away from one. They deny conventional ideas about plasticity, deny, even when within hands’ reach, any possibility of touch.

Pretty much everything Thiebaud shows on his canvases has the same hands’ off vibe, no matter how solidly and definitely the actual forms are rendered. This effect, I think, also owes something to Cubism. The forms are solid, but the space within which they are rendered in subtly compressed. Thiebaud’s still lifes are as much the descendants of Picasso’s early Cubist still lifes as they are of anything definably Pop. 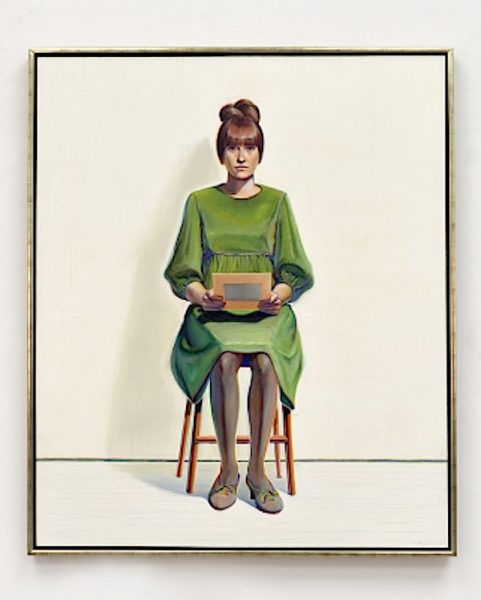 For me, the painting that dominated the show was a large full-length portrait called simply Girl in a Green Dress. The date given to it is the catalogue is ‘1966-2017’. This suggests that it has evolved over more than half-a-century, finally reaching completion just in time for this expedition to London. The girl is seen frontally, seated, staring impassively out. Not at one exactly – more like through one.

It took me only a moment to scan my memory bank and discover some comparative images. First, the grandest sort of single-figure Byzantine icon – the Pantocrator or one of his sterner Saints facing down the viewer. Second, Ancient Egyptian Old Kingdom pharaohs, in their official portraits, sculptured from granite.

Wayne Thiebaud has had a long career. What he is making is not anything Pop, but something age-old: art for eternity.