Whatever happened to Anthony Caro? In Jonathan Jones’ new book about the history of British art from Hogarth to Banksy, Caro gets about half a page. It describes how his abstract sculptures climbed down off the pedestals that three-dimensional works had previously been displayed on and placed firmly on the floor.

No work by Caro is illustrated, whereas there are multiple illustrations for the likes of Caro’s contemporaries Bacon and Freud, and even two for David Hockney, his fellow star during the 1960s and 1970s in the trend-setting Kasmin Gallery in London. I seem to recall that behind the scenes the gallery felt that Caro was much the bigger deal of the two. Essentially Jones thinks that, where abstract art was concerned, it was the Americans of that period, and of course a bit earlier, who really counted. Jones also has no time for Ben Nicolson, whom he dismisses as “a dry, dull imitator of the European modern greats”. 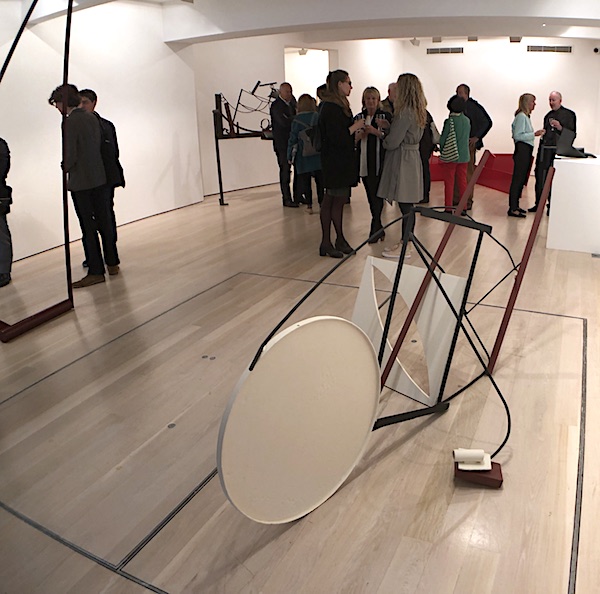 The new Caro show at Annely Juda covers seven decades of the artist’s career. He began as a figurative sculptor and shifted to abstraction after a visit to New York in the 1960s. Caro later said: “Clement Greenberg, the art critic, said to me, ’If you want to change your art, change your habits’, so I thought, well, let’s do something completely different, and it was that that made me go down to the docks and buy some steel.”

He had a major series of exhibitions in his lifetime, among them a solo at the Whitechapel in 1963, a retrospective exhibition just six years later at the Hayward, then one at the Museum of Modern Art in New York in 1975. He also received official honours – a knighthood in 1987, and the OM in 2000. He died in 2013. Since then there has been an increasing silence, though there is now, in addition to the show at Annely Juda, a display of significant outdoor works at Cliveden, and another display at Norwich University.

Looking at the retrospective in London, which runs till 6th July, the thing that dawns on me is how resistant the mature works are to any kind of interpretation. They have titles, but the titles tell you nothing at all specific. One is called Rondo. Another is Larry’s Land – painted blue-green, it might just conceivably be a metaphor for a landscape. Another is titled Emma Screen – who was Emma? Two others are just Table Pieces, with a Roman number. Despite its title, the exhibition is heavily canted towards earlier work. Fourteen of the thirty-odd items on view come from the 1950s. And all of these earlier works have some figurative content – warriors, bulls, babies, the head of a man who is lighting a cigarette. These serve as a reminder that, in the 1950s, before his conversion to abstraction, Caro worked as an assistant to Henry Moore, though none of them, not even a small figure of a Warrior, seems particularly Moore-ish.

The fact is that Caro’s reputation is now in suspense. There is one biggish sculpture, made of stainless steel and Perspex, entitled The Eye Knows and dated 2013 – the last year of Caro’s life. It is much later than almost anything else in the exhibition and is omitted from the exhibition hand-list. What does it look like? Just vaguely, it suggests an architectural model, with a curved length of pipe sticking out of it. What the eye knows it is not prepared to tell you. 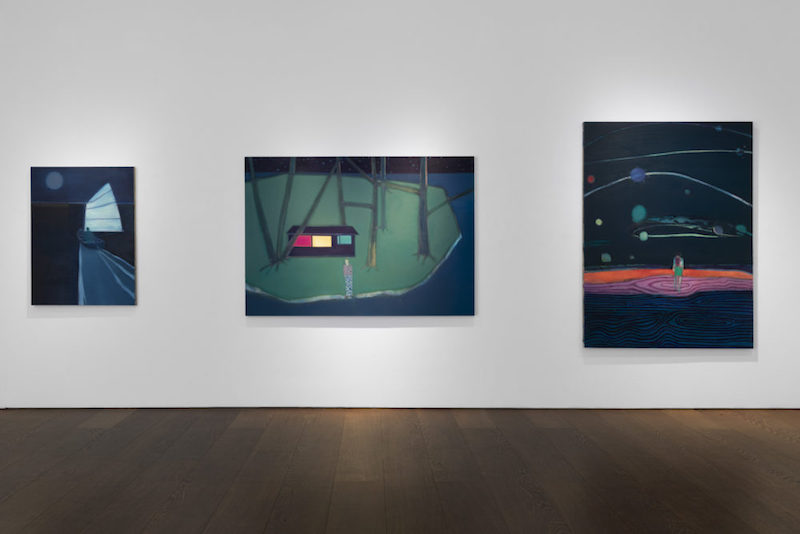 Other shows currently on view in London are less stubbornly resistant to interpretation. Tom Hammick’s show at Flowers Cork Street, until 18th May, is called Night Animals, and is about dream states, and also about music. The artist had a residency in 2018 at the Aldeburgh Festival. In an interview with Hannah Hughes, he talks about how he attended a piece by the composer Morton Feldman based on the work of the painter Philip Guston. “I crawled tp the concert,” he says, ”which started at 4 in the morning and it went on for 4 or 5 hours. I drew and slept and the music filled my dreams.” It’s easy to see these works as interpretations of dream states. One painting indeed is called Poet Dreaming. The artist clearly sees himself as being part of an outsider tradition that runs through the whole tradition of British Romantic art and literature. I think he is right about that, and he is not just a participant but also a contributor. 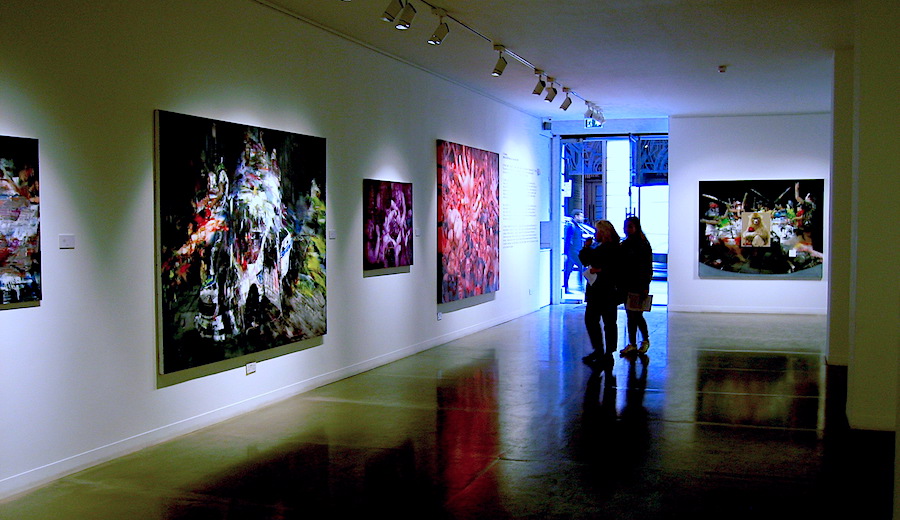 At the relatively new JD Malat Gallery in Davies Street, till 15th June, there is a show entitled Urban Scene by the Chinese artist Li Tianbing. He works in a fusion of Eastern and Western techniques. He seems pessimistic both about the future of China itself and that of contemporary civilization in general. As the gallery handout tells one, “he refers to the ‘foul and foreboding air’ felt in China upon recent visits, brought about by the booming economy increasing the gap between the rich and the poor. Causing psychological imbalance.” Some of his explosive big compositions summon up memories, whether actually intended or not, of the massacre in Tiananmen Square. These are ambitious works that tackle political themes in a non-specific way but do in fact manage to say things about the current condition of our world of big unruly cities, many of which seem to be just waiting for a chance to explode.