Memory Palace, an anthology exhibition currently occupying both White Cube spaces, the big one in Bermondsey and the smaller one in Mason’s Yard St James’s, has already received an ecstatic full-page review in the Evening Standard, from their resident art critic Ben Luke. Well, he’s an amiable fellow and I wish I could wholeheartedly join in.

No doubt my negative reaction was exacerbated by picking up a bad dose of food poisoning at lunch in a trendy Bermondsey High Street restaurant after visiting one of these sites and when getting ready to move on to the other, but I can’t offer matching enthusiasm.

The show does offer token resistance to the virtue-signalling programme currently espoused by the Tates. The art on view doesn’t constantly tug at your sleeve and murmur: “Ooh, look at me! What a right-thinking little kitty I am!” 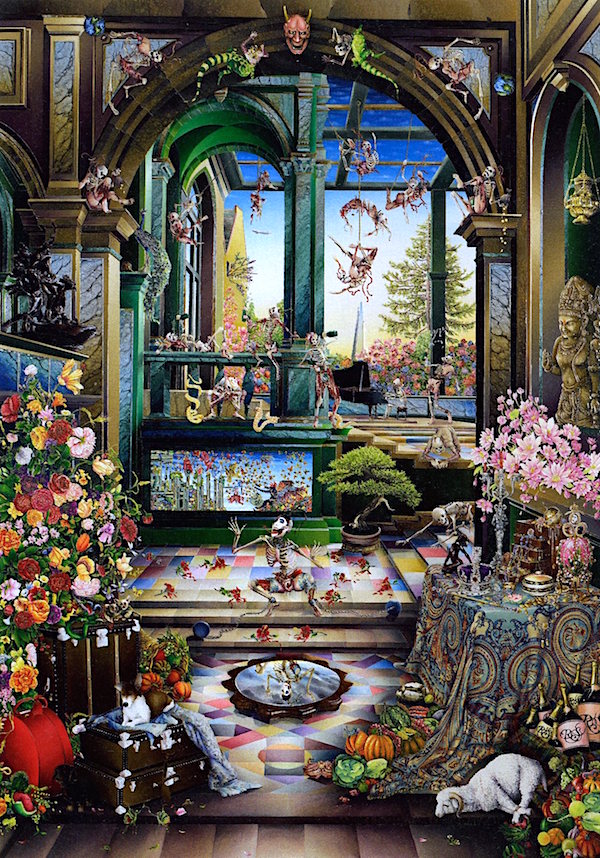 There are of course touches of this. The two works by Miroslaw Balka that Mr Luke particularly admires, and which are given a whole gallery to themselves at Bermondsey, offer a case in point. On the floor there is a mass of worn out doormats, collected by the artist in deprived neighbourhoods in Krakow, in exchange for new ones. These share the space with a column of nine hundred used tablets of soap “gathered from all members of staff at the gallery, each shaped by a profoundly levelling universal human act.” If you want two paradigms of the ephemeral and the smug, there you have them. Me, I don’t count. In the shower, I tend to use Sainsbury’s coconut bodywash, which takes no imprint.

The exhibition, taken as a whole, does not take its tone from this. Rather, it shows a frantic search for novelty, linked to Balka’s work because that too is entranced by the idea of completely novel materials. In the Mason’s Yard show, for example, there is a towering glass case, filled to the brim with ramshackle old-fashioned wheelchairs, readymade. But sometimes, as you go through the galleries, it seems as if any material or combination of materials will do, so long as these are not the ones you might expect, and without much interest, on the part of the artists who use them, as to whether they have any physical shelf-life or not. Posterity won’t be troubled with them.

Perhaps the wheelchairs offer an allegory, intentional or not, about how geriatric and on its last legs self-conscious Western avant-gardism actually is.

The work I liked most, encountered very early on in my visit to Bermondsey, was a painting by Raqib Shaw with a long title: Self Portrait in the Studio at Peckham (After Steenwyck the Younger II). A conflation of the most intricate kind of Mughal miniature with an equally intricate architectural painting by the Flemish 17th-century artist Hendrijk Steenwyck the Younger this, as the White Cube catalogue confides, “shows the artist playing the role of Croesus as a maniacal skeleton in an opulent, decadent interior.” Bravo him! Leaving the ‘skeleton’ bit out, and it is, in fact, had to discern its presence amidst the opulence of the décor, this is the setting that many artists making it big at international grab-fests such as Art Miami Beach would like to inhabit for real.

The difference between the White Cube shows and a big jangling art fair was that, when visited on a normal weekday, the settings were supernaturally quiet. With the works often divided from one another by gridded screens, it looked as if this was contemporary art in a prison of its own making.

Another gallery with White in its title, White Space not White Cube, tucked away at the very end of Pall Mall East, with a hard to find entrance around the corner in Whitcomb Street, offers frequent updates about the Russian art of right now, and not just about the dissidents offered recently by Saatchi. On view at the moment are some works by the St Petersburg artist Olga Tobreluts, whose exhibition in Trieste I recently noticed here. A big beefy full length of a woman dancing shows that Russian art is still very much alive and kicking. It would have cheered things up a lot in Bermondsey.