William Blake is one of the heroes of British art. In some ways, however, his work fits uncomfortably into the current establishment set up.

If one looks at Blake’s mode of drawing, he fits neatly into a particular stylistic epoch – ELS

Most of them of them are small – occasionally very small. Very often, they offer a combination of image and text, which means that you have to read them as well as look at them. Because they are usually works-on-paper, they have to be shown framed and glazed. This sometimes violates the artist’s intention which, was, in many cases, that the images he invented should be bound into books. 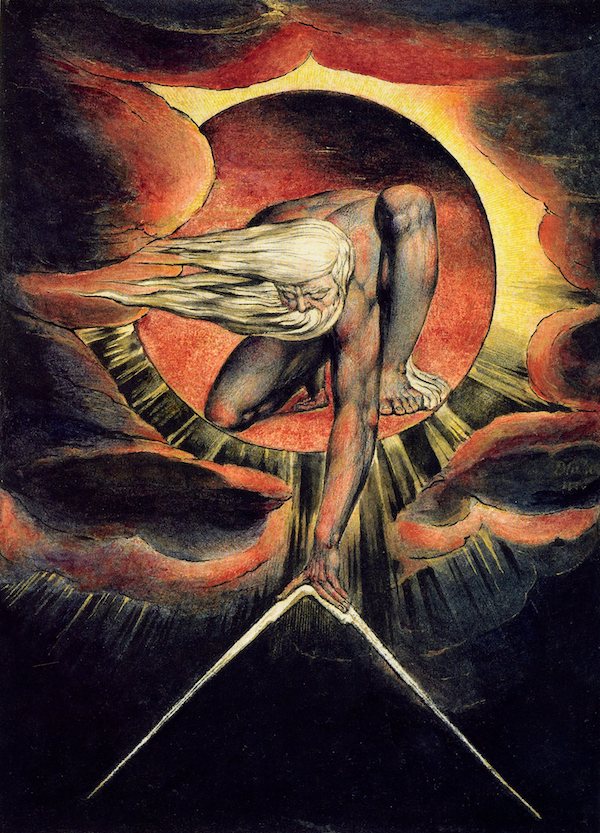 In addition to this, there is the fact that, in physical form, Blake’s drawings and prints go very much against the current of fashion in today’s official British art. There is hardly anything in this new Tate Britain show that can be called ‘immersive’ – just one, rather feeble, attempt to replicate the look of the only one-man exhibition that Blake had in his own lifetime. Plus some blurred projections that attempt to tell you what Blake’s art might have looked like on the large scale he was never given the opportunity to use.

In fact, the whole thing is at the opposite end of the scale, in both format and intention, from the big show by Olafur Eliasson now of view at Tate Britain’s sister museum. The Eliasson show is by intention immersive. The William Blake show is not. It presents a straightforward narrative of a career. Almost the only thing the two presentations have in common is the fact that neither of them is 100% friendly to disabled visitors. Part of the Eliasson show is impassable to someone in a wheelchair. There have been loud complaints on the Internet about this. At the Blake show, for a wheelchair visitor, pretty well all the works on view are inevitably hung at the wrong height. And some items in showcases would be, I suspect, very nearly inaccessible. This is an inevitable consequence of the small scale of most of Blakes’s drawings and prints. He is not a maker of monuments. There is no Blakean Sistine Chapel.

If the William Blake exhibition has some ‘avant-garde’ aspects – at least in the context in which we now employ the term – these are accidental. Yet, during his own lifetime, Blake was never a comfortable fit with the then-existing British art establishment. Only at the very end of his career, surrounded by a small group pf enthusiastic younger artist-disciples, did he gain a small measure of celebrity. In his political opinions, he was very much in the vanguard. For example, he condemned slavery long before Wilberforce set out to abolish the slave trade. He was also a pioneer, for his time, in creating interlocking image and text. In this, he reverted to methods familiar in the Middle Ages.

Mainly, his achievement was to create a whole series of mythological images. Some of these were illustrations to long-established texts, among them, for example, the Divine Comedy of Dante (to read this, he learned Italian late in life). Some were mythologies of his own devising. At the end of Blake’s career, his circle of young disciples called themselves ‘the Ancients’, Theirs was a revolt against the materialism of 19th-century life, a materialism powered by the Industrial Revolution. It was a logical transition from this set of attitudes in Blake’s work, and in the work of some of his disciples, to those expressed in the art of the Pre-Raphaelites, later in the 19th century. 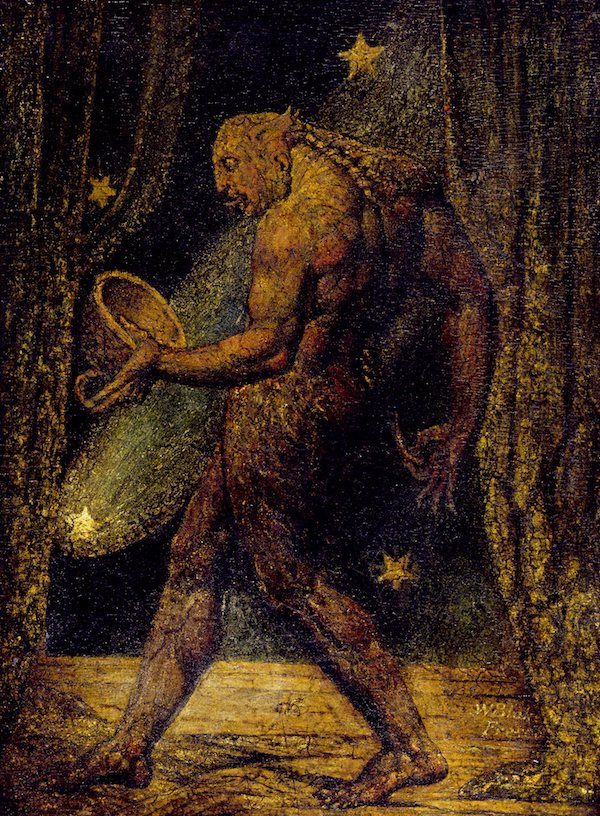 William Blake Ghost of a Flea

If one looks at Blake’s mode of drawing, he fits neatly into a particular stylistic epoch. This is a point the Tate show makes well, with several relevant examples by artists who were his contemporaries, working in Britain at the same time. The basic idiom is the Neo-classicism then prevalent throughout, but often with a twist of sturm und drang. The rugged, bearded elders, lissom youths and wafty young women who populate his compositions are all basically familiar. Unlike his lesser contemporaries, however, Blake ventures boldly into personal realms of fantasy. The exhibition offers one or two three-headed monsters that would seem quite at home in a show devoted to the 20th century Surrealist Movement.

Just occasionally, William Blake comes up with something wholly unexpected. The famous – very small – Ghost of a Flea is a case in point. It must be the first, and maybe the only, occasion on which these two concepts, ‘ghost’ ad ‘flea’, have been indissolubly linked together. Once seen, never forgotten. And Blake has a gift for wrongfooting the spectator. The equally famous The Ancient of Days, bending to measure the universe with a huge pair of compasses, is not, as it may seem to be at first, the icon of a hero-figure. It is, rather, a criticism of the ever-growing insistence on rationality, on things being cut-and-dried.

The fact is that Blake is less central to the story of British art, or to European art in general, than he is to the story of English literature. Yet the art is easier to absorb. He is also a hero of the fight against rationality that gathered force throughout the 19th century and finally blossomed into the Modern Movement in the arts.