The William Tillyer show at Bernard Jacobson is an example of what I’m starting to think of as the current ‘golden oldie’ phenomenon in London galleries. It opens hot on the heels of the John Loker: Six Decades show at Flowers East and the exhibition of work by John Virtue, now filling the Piccadilly windows of Fortnum and Mason.

You look through the painted surface, not just at it. If you insist, you can experience the painting as a semi-transparent – ELS

Tillyer and Loker are precisely the same age – 80. Both are distinguished, well-established artists who perhaps haven’t, in recent years, received quite the amount of attention they deserve. Where British painting is concerned, the focus has tended to be on the great recently dead – i.e. Francis Bacon and Lucian Freud, and also the great survivor, also now eighty years old, who is David Hockney. All three of these are unambiguously figurative painters. Abstraction and semi-abstraction -art without immediately recognisable images, has somehow been fading from our collective consciousness – a process accelerated first, by the popularity of new media, especially by video, which usually doesn’t venture into abstraction, and secondly by the increasingly self-righteous focus, especially in the ‘official’ part of the art world – I mean the Tates – on social issues and on self-conscious do-goodery. “If it doesn’t have a moral message, it isn’t really avant-garde.” Good Queen Victoria must be rolling in her grave. I mean rolling and romping with delight. Well, it’s always nice to win the approval of the great dead. 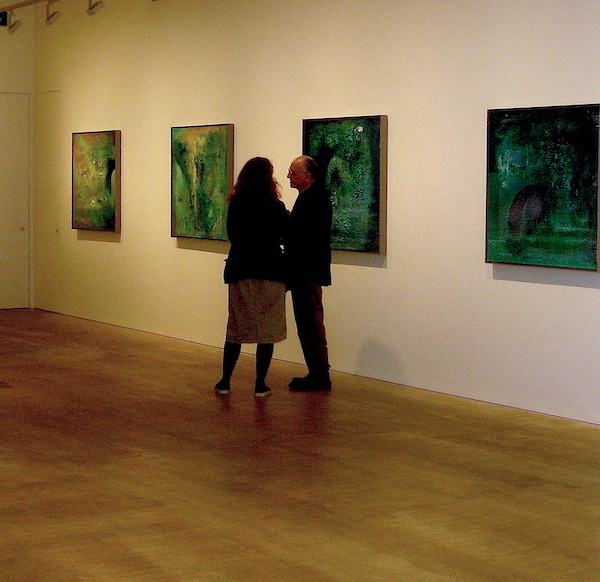 Tillyer’s paintings now at Jacobson have a cousinship to Loker’s work. You could hang work by the two artists side by side, and they wouldn’t jar. On the other hand, you’d be in no danger of mistaking one for the other. There are occasional accidental resemblances. In one of Tillyer’s works, I spotted an arching form that somehow suggested a fragment of church architecture. There is a similar arch, somewhat more wholly realised, in a more significant painting by Loker currently on view at Flowers East. It’s evident, however, that the resemblance is accidental. Tillyer’s work is only semi-abstract. It hovers between abstraction and the representation of nature

Where Virtue, not quite 80 but getting near it, is concerned, the resemblance is more interesting, though also accidental. Virtue makes monochrome paintings, which Tillyer doesn’t and his work is semi- rather than fully abstract, with roots in the late landscapes of J MW Turner. Many his compositions make use of a grid, which is something that Tillyer does in an entirely different fashion and when you photograph Virtue’s paintings, placed as they are now in Fortum’s windows, in a strange way they seem to become partially transparent. This is due to the reflections in Fortnum’s big shop windows. In fact, you see the painting through the reflection, which has a slightly eerie effect. However, this effect is the result of happenstance – it is not intentional.

The grids in Tillyer’s new work – they have appeared previously, but not I think in quite such a subtle way – are physically present. In the most literal fashion, they are part of the structure of the work. Through this grid, you can, if you look carefully, see the wall upon which the picture is hung. You look through the painted surface, not just at it. If you insist, you can experience the painting as a semi-transparent, very low relief sculpture. It exists as a three-dimensional object, not just as a surface.

The Bernard Jacobson gallery in Duke Street is right next to Fortnums. It faces the side entrance to the store. There’s a lot of fun to be had out of commuting between these two sets of subtle visual experiences.