Chatsworth House opens for the 2013 season on Sunday 10 March with an exciting solo exhibition of painting and sculpture by the late William Turnbull.  An interior gallery houses a portion of the exhibition while the gardens and grounds of the estate become a temporary home for larger works.

Chatsworth House has been the home of the Cavendish family for sixteen generations and is currently inhabited by the 12th Duke and Duchess of Devonshire.  Eight years ago, Peregrine and Amanda Cavendish initiated a contemporary art exhibition programme, which has since been cited one of the public’s top three reasons for visiting the estate.  The Cavendish family has long been a patron of the arts, both fine and decorative, and the Devonshire Collection is known as one of Europe’s most significant art collections.  For this exhibition the Duke and Duchess enlisted Alex Turnbull, son of the artist, and Clare Lilley of the Yorkshire Sculpture Park to curate the show.

William Turnbull was on of Britain’s great sculptors boasting a career spanning 60 years with numerous exhibitions.  Beginning his career as an illustrator at D.C. Thomson in his native Dundee, Turnbull joined the Royal Air Force in 1941 fighting in the Second World War.  After the war, the artist attended the Slade School of Fine Art to study painting and sculpture and subsequently moved to Paris where he worked in close contact with other prominent artists.

Though best known as a sculptor, the artist regarded his painting and sculpture works as equally important, and certain element cross over the two media.  In this exhibition at Chatsworth, visitors are given an intimate setting to view Turnbull’s paintings and small sculptures.  However, it is the exterior sculpture and the beautiful placement in the landscape that really demonstrates the grace and quiet complexity of the artist’s work.

Journeying through the labyrinthine corridors of the stately home, visitors eventually find themselves in the North Sketch Gallery, a warm and intimate space.  It is immediately apparent that the head, mask, and totem imagery that permeates Turnbull’s sculptural work is also a major component of his painting.  Working mostly in oil on canvas, the paintings are textured and abstract, imbued with an energy not usually present in his sculpture.  The paintings displayed are exclusively from the mid-1950s and show a range in abstraction and colour palette.  One series, each painting entitled ‘Head (Calligraphic)’ (1955-6), maintains a mask-like appearance but fuses the form of the head with brush strokes reminiscent of East Asian calligraphy, granting a more architectural aesthetic.  Done in black and white, it is easy to concentrate on the textural impasto and subtle differences in tone.  Also in the North Sketch Gallery are small-scale sculptural works from both the relative beginning and relative end of Turnbull’s career.  Like in the paintings, the importance of texture is apparent with some pieces having an impossibly smooth surface and others patterned by using corrugated cardboard pressed into the plaster cast.

Like many artists before him, Turnbull is interested in the “primitive.”  From Ice Age figurines to African masks and Ancient Greek sculpture, Turnbull derived influence from global sources.  Though primitive can be a controversial term, the artist honours his influences by demonstrating the enduring appeal of the lines and forms borrowed.  The majority of the sculptures exhibited outside have the “primitive” qualities that became a signature of Turnbull’s work.  Large and totemic, these sculptures are abstract to varying degrees and, despite their size, appear graceful and delicate.  Punctuating the earthy tones of browns, greys, and greens, are several works from the 1960s that explore rigid geometry and bright, primary colours.  “Angle” (1967/68) and “X” (1966) are interesting in the use of perspective and colour, but seem less sophisticated than the elegant bronzes.

What is perhaps most interesting about the exhibition of exterior sculpture is location.  These works would be lovely in a gallery or more neutral setting, but the grounds of Chatsworth provide an exciting backdrop.  The pieces are expertly placed to suit the serpentine hedges or the curve of a tree branch.  The heavily landscaped surroundings work beautifully with the carefully worked surfaces and simple forms of the sculpture.

William Turnbull passed away in November 2012, and sadly was not able to see the outcome of this exhibition.  Though not meant to be a retrospective, the exhibition at Chatsworth highlights many aspects of the Turnbull’s career and is a powerful memorial to a complex artist. 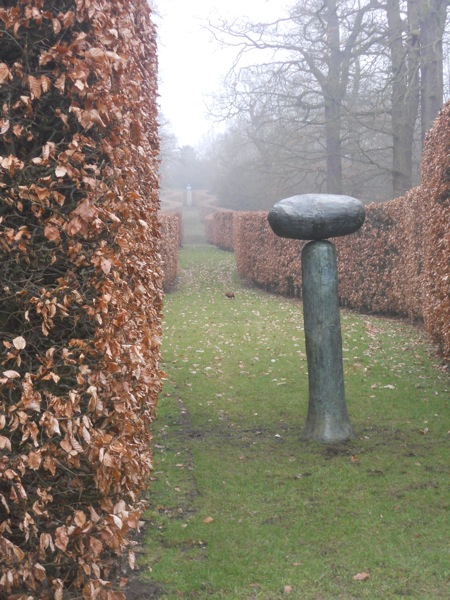 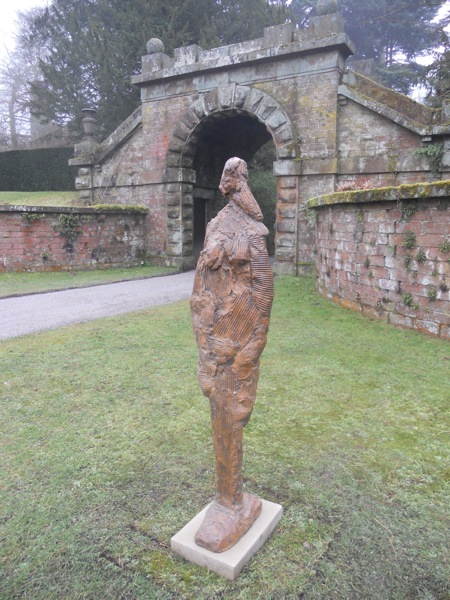 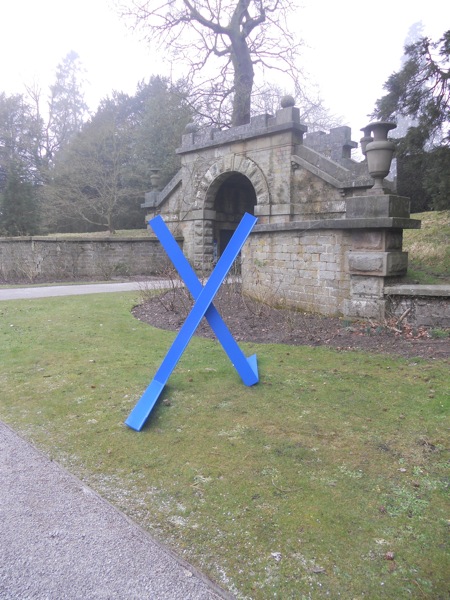