FACT Liverpool: Erika Beckman’s film, ‘Cinderella’ created in 1986 is a strange slip of time. I was quite intrigued by the film. At first, you are taken back to the 80s in terms of neon post-punk video effects and those hairstyles and the makeup. It could almost be a pop video or a musical at times, but it is primarily a feminist film and raises awareness of how women struggle to achieve their dreams and goals.

Overall, these are challenging works by both artists who explore and subvert the roles of women and gender – AL

The fairytale, ‘Cinderella’ acts as a template to depict the struggle of how women try to get somewhere but are repeatedly halted at certain points in their lives and dragged back to the beginning again. It’s interesting to watch. I felt as if not much socially had changed which was quite worrying.

There is still that situation where women work hard and get places but are shoved back to the start again or ‘kept in their place’, whatever that place is meant to be and is usually not the place they want to be as they keep being put back there time and time again. The frustration is expressed through the idea of a computer game. Cinderella has to try and reach the palace but has difficulty. The video draws attention towards Socialism and the Postindustrial tec shift at the time. Cinderella has been set up to fail. She continually loses and is out of the game. This is not an accident. She is being set up and is not allowed to win.

The film at Fact portrays social roles, social expectations, gender identity controlled by social structures. Cinderella’s role is fixed within the system, but she can’t find a way out. This system is also not where she belongs. She doesn’t fit into this system that is being assigned to her. This 1980s new wave film shows the oppression and struggles many women experience in modern society in employment and on their journey through life or wherever they are going. As you watch her fail at each game the frustration and the unfairness become very obvious. Thank goodness; eventually, she finds a way out, a journey and method that suits her needs on her own terms. ‘The only thing I can do is step aside and let them through,’ she says. Listen to the words as they tell the story. 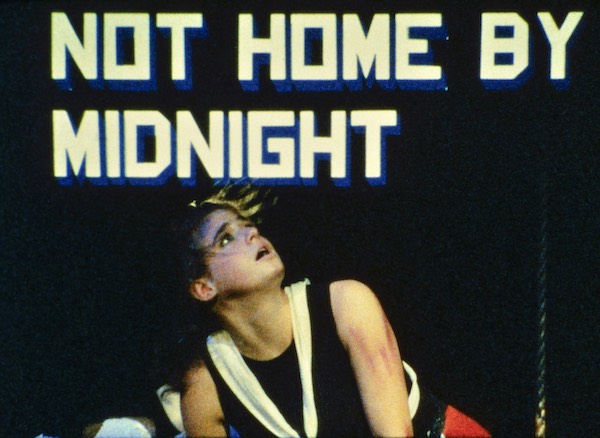 She finally climbs through the hole and finds her freedom and renewed strength. This is a bit vague, but you find your own interpretation of what it is that makes her find new survival techniques. Sit there and reflect but you probably won’t need to.

Walk through to her next film, ‘Hiatus’. ‘Maddie’ is inside a VR game. She attends her garden and has to keep it watered and flourishing. The film is created in a DIY, naive style and points towards the ‘me campaign’ – “a world where everyone can be themselves without discrimination.” Maddie follows her avatar, ‘Wanda’ and has to try and stop her being exploited by a shifty character, a Texan business developer who wants to take her garden, seize her organic approach because it’s beneficial for him. This is her space, and she has to make it through the game and over the unpleasant and challenging hurdles.

Upstairs at FACT, there are also two films by artist Marianna Simmett and an installation.  The two films stood side by side at an angle so that you watch one at a time.  One film is called ‘The Udder’, and the film besides it is called, ‘Blood’. Prepare yourself. I found them disturbing and challenging to watch although I forced myself to write this review.
The udder is a film about mastitis in cows. Believe me, if you are not vegan now, you soon will be after watching this film, more so to think that dairy cows are objectified in this horrific way. Throughout the film, we are told about the teats of the dairy cow with close up film of the udder. The infection is discussed as if the cow were just a machine which to the dairy industry it is. The language is clinical and unemotional.

Intercepting these rather harrowing thoughts and close-ups is a young girl on the farm. Simnett ‘plays with symbols of sexuality, beauty, purity and morality, drawing parallels between body parts…’’ Linking this idea to the cow, the milk we ingest, ‘’revealing societal pressures and also those within the family home.’’ There is this disturbing connection of the cow being objectified while also ‘’alluding to the necessity for women to endure violence and maintain their desirability.’’ ‘The work involves the legend of St. Æbbe of Coldingham who to protect her chastity, disfigured herself in response to the threat of rape.’’ Read about her on Wikipedia. ‘Simnett combines mythology and medical technologies to create distorted tales of transgression.’’ I found this film very sad, but Simnett does point out some important issues surrounding ‘’oppressive ideologies and restraints.’’ You will be challenged emotionally and physically by these films.

Next door, there is a neon strobe light installation. Simnett induces her own body to faint alongside the presence of a medical practitioner. Apparently, this installation was provoked by her grandfather’s survival of a mass execution during the Holocaust when he lost consciousness and collapsed in front of a firing line. I couldn’t actually go in the room as the strobe was too much for me. You can hear her fainting, and the gasps for air and I just couldn’t listen any further as I found it too distressing.

I found her film ‘blood’ very disturbing also. It will bring different emotions out in people. I just panicked at the feelings of claustrophobia and abduction, the idea of not being able to escape a place, a room and oppression. Once again the main character is the young girl, Isabel. This really must be one of the most bizarre and thought-provoking art films I have ever seen. If you don’t read what this film is about before you watch it, be prepared to discover things you never knew or felt before. There is in-depth meaning to these films and much symbolism.

Overall, these are challenging works by both artists who explore and subvert the roles of women and gender in a patriarchal world. The pamphlets are excellent and explain what the works are about. It is up to the viewer whether you read them before or after watching these films, but I recommend reading them.