Two exceptional touring exhibitions have converged at the Guggenheim Bilbao, one from the Centre Pompidou titled ‘Women in Abstraction’. The other is a retrospective exhibition of the New York figurative painter Alice Neel titled, ‘People Come First’. Both are worthy of making the pilgrimage to this highly-regarded art hub.

The exhibition is the first global survey of abstract women artists

‘Women in Abstraction’ has been curated by Christine Macel, Chief Curator Centre Pompidou; Karolina Lewandowska, Director of the Museum of Warsaw, in collaboration with Lekha Hileman Waitoller, Curator of the Guggenheim Museum, Bilbao. The scale of the exhibition is ambitious and it doesn’t disappoint. I am always open to learn about artists who are not the usual suspects. This exhibition catalogues a list of artists who were creating Abstract and Non-Objective art as early as the mid 19th century- an eye-opener.

The exhibition is the first global survey of Abstract women artists, which reaches far beyond Europe and North America, including work created in Latin America, the Middle East and Asia, whilst recognising African American and Spanish female artists who have for so long been overlooked.

A number of questions are raised in this comprehensive show, for example, “What exactly is Abstraction?” Other concerns deal with the invisibility of women in movements that seem to have sidelined or written them out of history altogether. Should we isolate “women artists” in a separate history? Or should art be non-gendered? By exposing several of these neglected artists to a new audience, we are given the opportunity to study a whole new timeline for Abstraction.

Highlights include discovering the work of Georgiana Houghton, an English artist working in the 1860s. Her Spiritualist roots influenced a body of work illustrating “sacred symbolism.” Another interesting British artist was the gender-fluid  Marlow” Moss (May 29 1889 – August 23 1958), who studied with Fernand Leger and developed a Constructivist style similar to the De Stijl movement producing both painting and sculpture. Harmony Hammond, still an active maker is one of today’s boldest abstract painters and installation artists. Her work from the 1970s is onview in the exhibition.

The show covers work produced between 1860 and 1980. The curators told us, ‘It is an open-ended timeline’ which will hopefully continue through to the 21st century in the future. 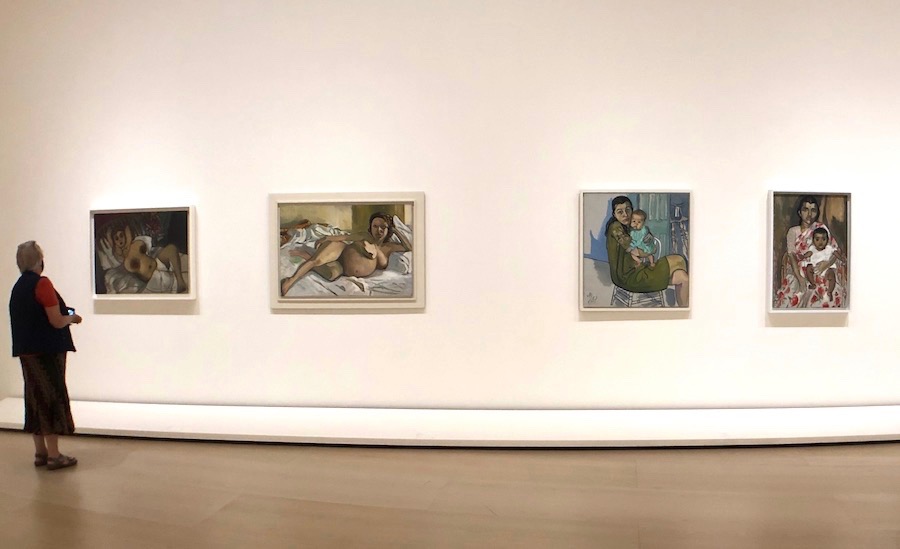 Alice Neel (1900–1984) was one of the most inspiring figurative painters of her generation. The curators Kelly Baum, Cynthia Hazen Polsky and Leon Polsky, have put together this remarkable new exhibition Alice Neel: People Come First, which has travelled from NY’s Metropolitan Museum to the Guggenheim Bilbao.

“When figuration fell out of vogue in New York during the 1940s and 50s and Abstract Expressionism came to dominate, Neel refused to follow trends and change her style even though ‘formal and technical experimentation was always part of her practice.’ She once described Abstract Expressionism as ‘anti-humanist’ continuing to paint portraits of a neglected urban underclass. Neel utilised her abilities as an artist to portray themes of empowerment and strength as well as sacrifice. Her observations of political protest and human suffering see her as both a chronicler and compassionate observer. Neel lived in New York’s Spanish Harlem for over thirty years, where many of her subjects and inspirations originated. Her sitters came from diverse backgrounds and ethnicities.

Neel approached nudity and sex in a natural light. She never objectified the human form and the outcome was often vulnerable and moving. She depicted the ‘physical struggles of women, especially impoverished women like herself’.

Artists Exhibited ‘Women In Abstraction’ Include: