Paul Carey-Kent highlights 10 interesting artists who happen to be women!

No sooner have I celebrated women in charge than a glut of interesting artists who happen to be female open shows in the first few days of April, so here’s some extra coverage… It’s an indication of the richness of London’s art scene that this list isn’t even exhaustive: there’s also something to be said for the shows of Rachel Ward at Ronchini,  Henny Acloque at Ceri Hand, Annie Lapin at Josh Lilley, Elizabeth Frink at Beaux Arts and Susie McMurray at Gina Agnew –  all of which have just opened; and that’s not to bring in shows I haven’t seen or group shows – or men…. And next up are Saloua Raouda Choucair at Tate Modern, Lisa Yuskavage at Greengrassi, Fernanda Gomes at Alison Jacques, Carol Rhodes at Mummery + Schnelle and Melanie Manchot at Carslaw St Lukes, all opening on 18-19 April.

While this whole large show is a recommended chance to see Rachel Whiteread  expanding the ways in which she makes something solid out of absence, it may be that the most beautiful art room in London now is the one in which she’s placed six windows and five doors against the walls. These, negative casts in pale tints of translucent resin, pick up a patina of light in seeming to reveal the internal structure and history of the would-be entry and viewing points, which refuse to function as artistic and architectural convention would have it. Whiteread also has a nice new line in small collages of packets and coloured cellophane, which give a  transcendental twist to Rauschenberg’s cardboards.

Canary Wharf is well worth an art visit: there are 65 permanent works scattered around the complex, not all impressive, of course, but highlights include Bill Culbert, William Turnbull and Sinta Tantra. Plus the current temporary exhibition comprises a major overview of recent work by Irish sculptor Eilis (as in ‘eyeless’, it only just occurs to me, as if playing on her show’s title) O’Connell. She’s an ambitious transformer of natural objects, and ranges here from pellucid resin pebbles to bronze casts of plant stems to large scale figure-like groupings in the lobby of One Canada Square; to several monumental works in Jubilee Gardens, of which the gleaming polyester resin, steel and paint of  ‘Anode’ (2010) looms up with particular presence against the corporate backdrop.
Nika Neelova: Fragments Shored Against the Ruins @ Vigo Gallery, 21 Dering St – Central
To 3 May: www.vigogallery.com 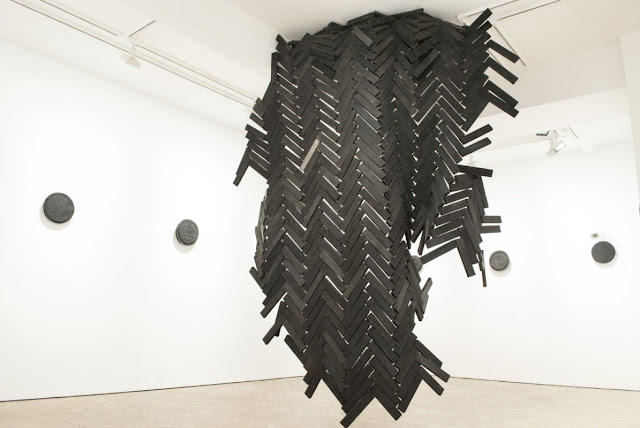 There’s more imaginative casting  at Vigo Gallery, which is  divided in two for young Russian artist Nika Neelova’s seductive way of integrating the past into her vision of a damaged future. Up comes down in the front space, which pitches a set of time-worn banisters, reconstituted into a rough circle, against aeroplane propellers earthed in fragile concrete. Down moves up at the back,  where we seem to be below ground, looking at eight charcoal casts of coal hole covers, which act like high windows around a central sculpture in which the parquet floor pattern  appears to unravel and arise.
Anne Hardy @ Maureen Paley, 21 Herald St – Bethnal Green
To 26 May: www.maureenpaley.com
Anne Hardy is known for her large images of the life-size sets she constructs – often using found items, often from the street – in her studio purely for the purposes of photographing them: three or four per yer over the last decade. Recently she has used mirrors and included text in the set-up as means of ramping up the levels of illusion and complexity of classification systems addressed. She presents three new ones here, but one is bound to wonder what the sets themselves look like, and now Hardy has constructed not sets to photograph but two sets as sculptural environments – one made from the left-overs from the other – which can be entered and treated as sculptures in themselves or as the scenarios for an imagined photograph.
Rula Halawani: Traces @ Selma Feriani Gallery, 23 Maddox St – Mayfair
To 11 May: www.selmaferiani.com

The familiar trope of photographing possessions with historic resonance is compellingly re-booted by Palestinian artist Rula Halawani: she visited hundreds of families who were forced to flee their villages in the face of Israeli aggression in 1948 to see what household objects they had retained; photographed a hundred collections; and whittled those down to the eight beautifully homogeneous sets of images we see. They’re presented alongside the families’ stories of how the items came to be handed down across 65 years, allowing us to muse on questions of identity and the pursuit of political change.

* Text translates: Thuraya Farah, 67 years old, is originally from Zakariyya village, northwest of the city of Hebron. She now livesin Al-Arrub camp. “When we fled, my mother locked the door to our house with this key. She thought that in a few weeks we would come back to our house. Many years went by and we still did not return; we keep this key and we pass it from one generation to another so that our children will never forget where they are from, and they will always remember that they have a beautiful home waiting for them to go back to. This key is a symbol of our heritage and our return to our homeland, the land of our ancestors…”

Tot Taylor and and Virginia Damtsa’s ability to generate interesting shows at a slant to the mainstream shows no sign of slowing after seven years: recently they’ve emphasised psychologically charged work by women (Judy Chicago, Penelope Slinger, Josephine King, Alice Anderson). ‘Love Support Machine’ sees Jill Richards use attractive still life drawings to lure us into exposure of her rawest feelings about a string of lovers, friends, relatives and even the harrowing tale of her lost baby through innocuous-looking drawings of the objects and documents she has retained – supported by texts from the heart and boxes overflowing with the actual souvenirs. Apparently one ex turned up to the opening: Jill wasn’t pleased to see him, and he wasn’t pleased that she was wasn’t pleased!

Virginia Veran @ Centre for Recent Drawing, 2-4 Highbury Station Rd – Islington
To 25 May: www.c4rd.org.uk
Virginia Verran is best-known as winner of the 2010 Jerwood Drawing Prize with a pen on canvas tondo. Sure enough, much of the work at C4RD  fits that description, but she’s been painting for many years in various formats, and the drawings here exchange – in an appropriately circular manner – language and ideas with a large square painting in which toy-like bombs seem to float into a murky river of a body. Or perhaps not: all the works  arrive at near-abstraction from figurative origins ambiguous enough that Verran was still juggling between titles as the show opened, though all her variants suggested that a dark environmentally-troubled heart beats beneath their more formal concerns.
Jodie Carey @ Edel Assanti, 272-4 Vauxhall Bridge Rd – Victoria
To 11 May: www.edelassanti.com

In this installation of a series first shown in the bigger space of the New Art Gallery, Walsall, the monumentality of Jodie Carey’s plaster slabs is brought home – they’re 3 metres high, 180kg each and only remain standing in their sculptural interplay due to sandbags on their ‘feet’. Yet Carey gives these behemoths a paradoxical and childish lightness through pastel colouring them with crayon. They also pick up a multitude of irregularities in the process, making them seem as worn by the world as most of Carey’s elegiac oeuvre… Talking of which, don’t miss the drooping blooms in the office: damage-and-all new prints of found 1920’s negatives.
Liane Lang: Fallen @ Art First, 21 Eastcastle St – Fitzrovia
To 11 May:  www.artfirst.co.uk 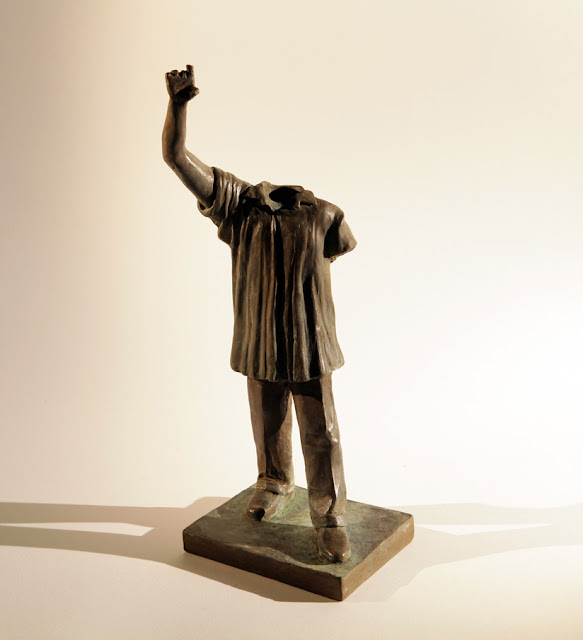 Liane Lang’s practice includes a well-established series of photographs in which rubber sculptural interventions – a stray leg, for example – cut across time and into the monumental pretentions of public sculpture. Revolutions have provided her with an ideal source: the parks of statues discarded by regime change. How logical it seems – now that she’s done it – for Lang to complement the photos with cast versions of some of those statues in their diminished states: thus do the mighty find themselves half-toppled, beheaded, shot through, rendered limbless or even reduced to their bossy boots.
—————–
Alex Olson: Bravo Zebra @ Laura Bartlett Gallery, 4 Herald Street – Bethnal Green

Young LA painter Alex Olson makes inter-related ‘Proposals’ for body sized paintings which start with typical abstract tropes such as spots, stripes and dashes, then undermine their expected regularity by making explicit use of crude tools – scrapers, knives, rough brushes – to ginger up the surface, mismatch colour and form, and smuggle in suggestions of textiles, graphics and not-too-fashionable ceilings (as well as art history, split 50-50 between Ab Ex and Minimalism). The result, in Laura Bartlett’s first show since taking over Hotel’s former space, is a lively walk along the Robert Ryman way.
Images courtesy of the relevant galleries and artists + Mike Bruce (Whiteread) Main Photo: RACHEL WHITEREAD
Detached III, 2012 courtesy of the Gagosian Gallery