Yassine Balbzioui/James Ostrer – Kristin Hjellegjerde London: Masked figures in balaclava style hats, only their eyes visible peer directly at the viewer from the round and oblong canvases. Green is the dominant background colour. Plants and lawns, and green stripey seas or interiors. Figures sit on recognisable chairs, wearing dark formal suits, stand beneath trees, sit on scooters together.

What’s happening? Some kind of masquerade, some kind of play. The paintings appear developed from photographs of people, then processed through the artist’s imagination and dominant aesthetic that he uses to tie this group of explorations together. He works from an archive of collected images which could include film stills, travel photography and the portraits that he takes of subjects wearing costumes and masks. This is evident from the shading and the delivery of the subject. It is influenced by photography but taken elsewhere. The effect is to transplant the figures, so they pose in a scene that is only partly anchored in a realistic background. 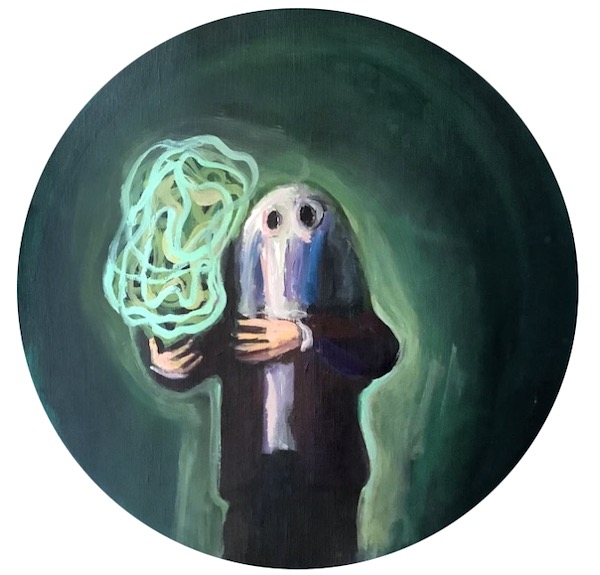 Yassine Balbzioui, was born in Morocco in 1972 and lives and works in Marrakesh – Kristin Hjellegjerde

Balbzioui’s work is steeped in theatre. Avant-garde and absurd theatre, role play. The way in which our personalities are affected by wearing masks. This series goes deep into one aspect of these studies. He places his subjects not against a simple black background, which he has used for previous works, but against the green of the forest, of Grimm’s fairy tales, representation of the unspoken recesses of the psyche according to psychologist Carl Jung. This is put forward in the notes for the exhibition, and it’s somewhat convincing. But it is more his usual, outstanding work, located in a new dominant colour. It could be any colour, really. This series is green.

What I like about Balbzioui’s work or one thing I like about it is that he doesn’t play to expectations. He is a mature artist ploughing his way through his paintings. He paints well. But the pictures are psychological, poetical. He does not produce the kind of work that is associated with Moroccan art and the green, to me, is an aspect of that. This vibrant viridian green is not the colour that is associated with traditional, tourist, traveller Morocco, not with the Morocco that is presented, stitched up and sold to tourists and international voyeurs. That is what is most impressive to me about this use of green.

I feel drawn into these scenes without having to stop and think, what is the cultural leap I am making here. As a modern, avant-garde artist, I can immerse myself in the thought without anxiety that I might not have the necessary cultural kit to understand. I realise that I’m not hear to understand consciously. I am in a surreal world, where the figure is shaded even as they are performing some emblematic activity. This activity may be mundane. Seated, standing. It is rarely anything particularly acrobatic or unusual, anything complex. The figures are mostly quite static, staring at the onlooker through the eyes of their mask.

For me, it is easy to identify with the painter. That’s how I approach this work. I identify with his point of view as a director, pushing his players at me through his masterly paintwork. And the humour of this point of view is unmistakable. It is a humour of childhood, the juxtaposition of danger and dressing up. In the series of small round works, there is a masked portrait of Balbzioui himself, in a green eye mask, holding a red rose in his mouth. Do you want to dance? I think it might not be the outcome you expect. Chance plays its part. Us people, we cannot see so well what we are doing, but we take a risk when we step into the future. A masked figure, a sheet over his head with two holes cut in for his eyes juggles with three pairs of scissors. They are not frightening scissors with their red handles, they could be used in a school workshop, but still, the blades are there nonetheless and who knows how they are going to land when the juggler catches them. Ouch.

Visiting Balbzioui’s show is a delight for me as I am already a confirmed fan not only of his painting but of his performance. I have been impressed by his avant-performance take of Gnawa – he shared with me an incredible short video of him and friends dressed in navy boiler suits with buckets on their heads, spoons attached all over, giving to a theremin as if on speed. 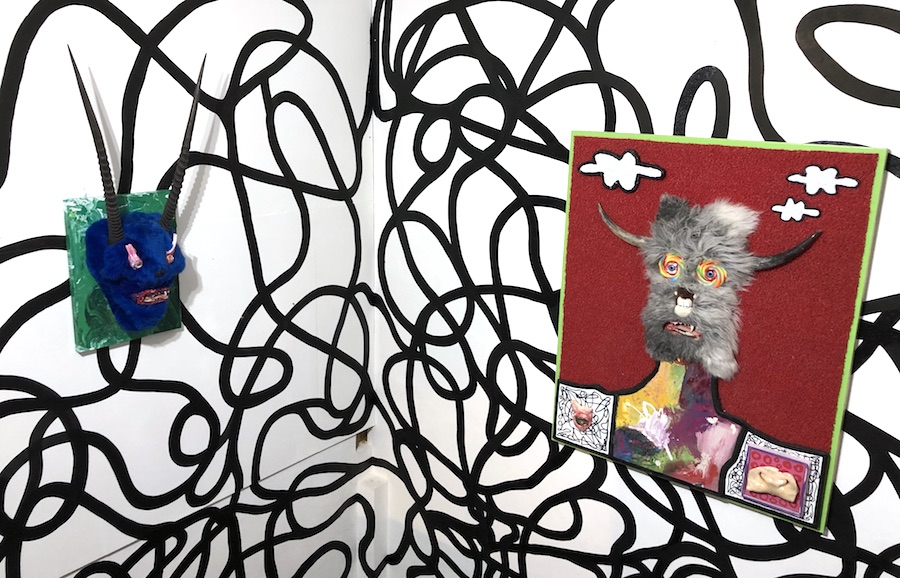 In contrast, seeing James Ostrer’s work at Kristin Hjellegjerde a unique gallery at Melior Place, I stepped into the calm before the storm, preceding the private view event.

A really fun apartment, with collages created during a residency, Ostrer’s work becomes a real party piece reminding me of strange party houses of squatting years during the 1980s and 1990s, but more civilised and with more money. It’s as if the whole gallery-flat is the artwork. Lying on the bed, I wonder if one of the furry creatures is going to get in with me and slice me up with its craft-knife ears. Another playful show, using animal imagery, their furry faces bulging with lipstick mouths in a rock-star aesthetic, with walls wander-covered in squiggles, felt tip doodles dancing over the ceilings. The beds on which you are invited to sprawl feel just as much part of the show as the colourful pictures. Sadly I did not hear the full effect which is completed by an audio piece in which Ostrer answers questions. The revelation of the artist’s personal information (or not) is part what makes this particular ambience of this piece. I could have been stepping into Ostrer’s performed artist personality as well as stepping into a party house.

The venue knocks me out. I shout up from the street to the open area. Can I come in and have a quick look? I have to get home. Sorry, I’m early. It’s okay. Everyone at the gallery is incredibly welcoming, including Ostrer himself. Kristin Hjellegjerde has boldly taken this unusual space, a beautiful flat which will become a new London home for the family in 2021, a wonderful space, and is using it as an unusual residence and showcase opportunity. For those who are interested in architecture and stunning flats in central locations, it’s worth visiting as well as those who want to see what James Ostrer has been up to recently. Just adore that vaulted open-indoor glass auditorium and be glad some people, gallerists and curators as well as artists, share their dreams with us.