The presentation of work by Yves Klein in the staterooms of Blenheim Palace, the stateliest of all Britain’s stately homes, is part of a growing trend. The show follows hot on the heels of the Damien Hirst show, currently on view at Houghton Hall, another legendary stately.

“Blue has no dimensions; it is beyond dimensions, whereas the other colours are not” – Yves Klein

In one way, this is just part of a long tradition of aristocratic patronage of the visual arts. In another, it marks an effort on the part of those who are responsible for these architectural behemoths to make what they do relevant to the crowds of sightseers who continue to flock to them. If you go to Rome, you will find similar efforts being made in the settings offered by famous palazzi – in the Galleria Borghese, for example, and in the Doria Pamphilj, home to Velazquez’s famous portrait of Innocent X. 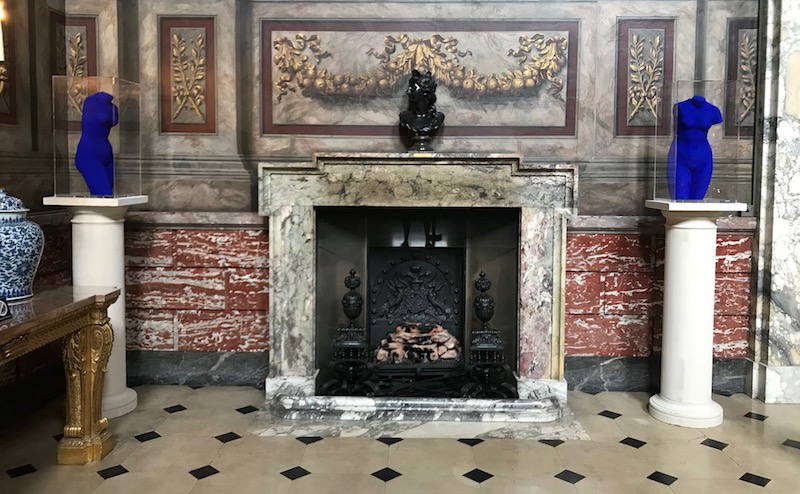 The Yves Klein show at Blenheim is fascinating for more reasons than one. Klein was the kind of short-lived glamorous bad boy whom enthusiasts for contemporary art are always eager to celebrate. An older brother-in-arms of Jean-Michel Basquiat, an exhibition of whose work was recently on view at the Barbican Art Gallery.

Yet Klein is also, however, emblematic of a radical shift in taste because he belonged to the very last generation of French artists who counted for something internationally. In their hands, the dominance of French Modernist art, universally accepted since the Fauves, finally sputtered out. If you look around you now the big names are German, American, Chinese, Japanese. Even – God help us – actually British.

Yet the fascination of the Blenheim exhibition lay not just in the way it resonated with the historic grandeur of its surroundings, but also the way in which it seemed to foreshadow a great many things that have happened since Klein died in June 1962, at the age of 34. We forget that this Frenchman did them first. More than half a century ago.

Very much of what we have now, and which we are told over and over again are unique signifiers of today’s avant-garde, are things fully present in Klein’s art and career. 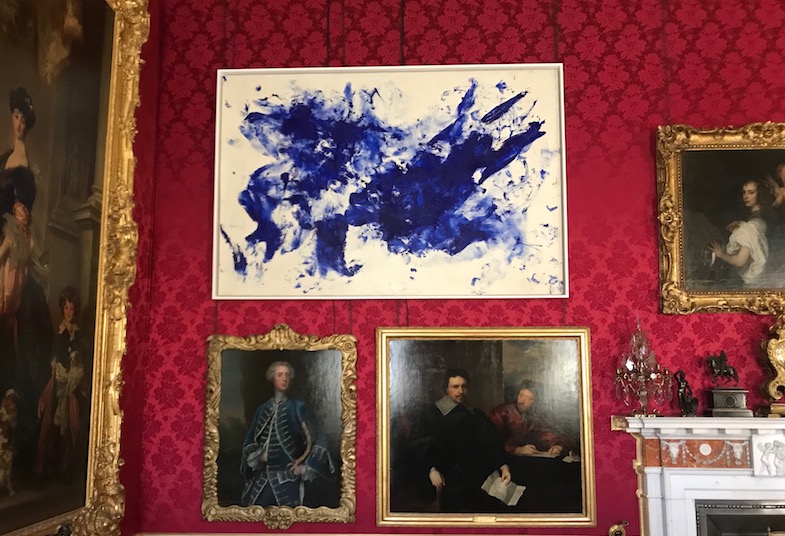 He was, for example, a Minimalist. The exhibition confronts you with huge areas of unmodulated colour, most of them in unmodulated IKB (International Klein Blue, a shade the artist patented). He was an Appropriationist – he made or had made numerous female torsos, differing only from the existing Greco-Roman model from which they were cast by being uniformly coloured in that signature hue.

He was a Performance Artist, more radical than today’s heroine Marina Abramovic, who believed just as she does, that his mere presence was enough to create art. Or, maybe going further, that art could be made by his willed absence.

As Klein said, in an announcement issued in connection with a Festival of Avant-Garde At presented in late 1960:
‘On Sunday, 27 November 1960, from midnight to midnight, I thus present a full day of festival, a true spectacle of the void, as a culminating point of my theories. However, any other day of the week could have been used… 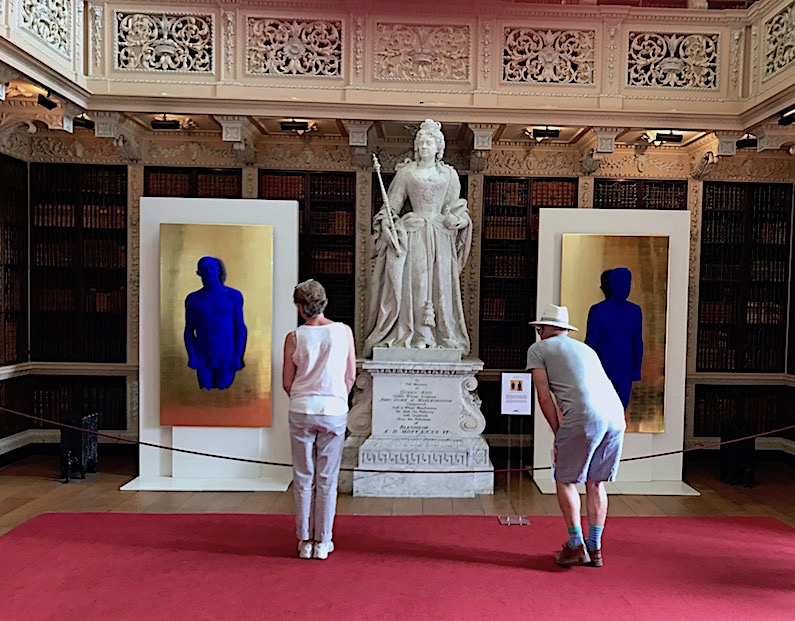 The theatre shall become, or at least rapidly attempt to become, the pleasure of being, of living, of spending marvellous moments, and with each passing day of better understanding the moment.’

One of the artist’s best-known works, only preserved in a photograph (faked as we now know), was Klein’s Leap into the Void. Yes, jumping ecstatically into space, with no apparent fear of the consequences. Understandably this is not present at Blenheim.

What is present, here and there in these great palace rooms mingled with the Marlborough family portraits, are some of Klein’s Anthropométries, perhaps his best-known surviving creations. They were made by coating a naked model, female of course, in IKB blue paint, and then dragging her bodily across a blank canvas. Usually in the presence of an audience.

I wonder what the #MeToo brigade would have to say about this if it happened today? Very probably admiration for a recreation might remain intact if a woman artist were to be commissioned to do it to a totally nude and suitably handsome young man. Not in front of the kiddies, maybe (Blenheim does get a lot of those), but volunteers, anyone?