“I am re-writing a Black Queer and Trans visual history of South Africa for the world to know of our existence, resistance and persistence” – Zanele Muholi

Before you get too excited, this exhibition was set to open at Tate Modern 5th November but due to COVID19 restrictions will be postponed until a future date has been decided.

As a white, middle-aged, middle-class, heterosexual woman I am, perhaps, setting myself up to write about the South African artist Zanele Muholi. Yet, when I first encountered their (preferred pronoun) work, I was, without knowing anything of their sexual orientation or political activism, simply bowled over by their powerful, strong and beautiful images. That is how it should be. 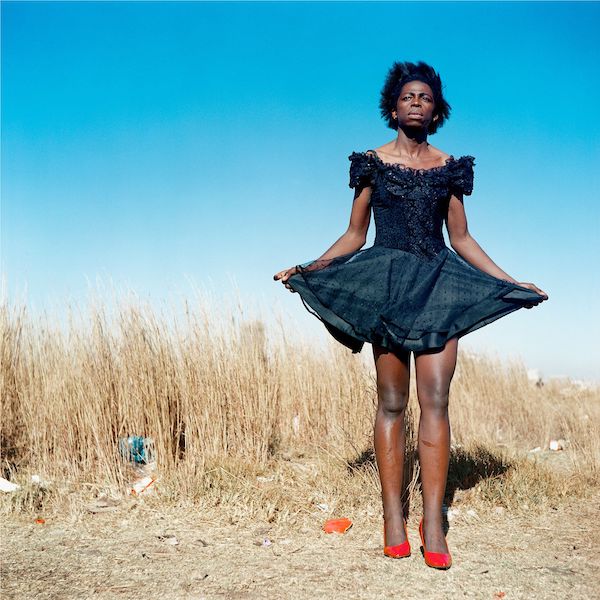 Good art speaks beyond its target audience and touches something universal. Muholi’s black and white portraits of women emphasise the richness of their ebony skin highlighted by chalky lips, white lace mantillas and hair-combs, presenting them like great Kaberion goddesses (a site located several miles outside the Greek city of Thebes), where the African features of Hera, Minerva and Aphrodite regularly appeared on ancient Greek skyphos, a large ceramic cup used by ancient Greeks for the consumption of copious quantities of wine. For the Greeks, these faces were considered ‘exotic’. But, unlike the patronising otherness associated with this term within contemporary culture, they saw the exotic in nature as having great power, especially to ward off evil. The depiction of Olympian goddesses as African was a ‘positive’ form of the ‘radicalised other’. A view borne out by the pioneering scholar, Frank Snowden, [1] who claims that racial prejudice didn’t exist in ancient times but evolved only with the advent of slavery in the early modern period. Muholi’s formidable, self-decorated subjects stare out confronting the viewer with their white eyes set in jet black skin. Serpent’ ruffs’, bejewelled hairpieces and large beaded or raffia necklaces are worn like regal accessories. These individuals fill the picture space with all the presence of a Cleopatra or Queen of Sheba, undermining both the dominant male view and the colonial white gaze. 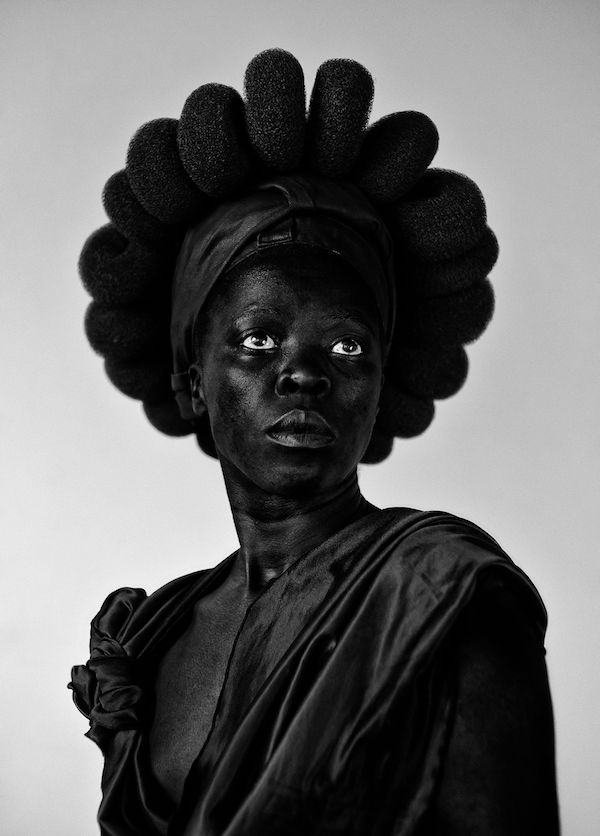 Zanele Muholi uses their photographs to create a Black History of Now. Often much of this everyday reality has gone unseen by the rest of the world. The emphasis on Black LGBTQIA+ culture, not as some fictional past but as lives lived and visible in the here and now, is a challenge to any latent complacency. South Africans (no doubt aided by the history of apartheid) have traditionally seen ‘black queer bodies as threatening, un-sacred and tragic’. Muholi documents these people and their stories to reconfigure ideas of history/normality/acceptability. In so doing, they not only challenge how the mainstream views’ alternative’ sexualities, but how this mirrors how we read and interpret the past, what is made visible and by whom, and what is given agency to be brought centre stage.

Not only a highly gifted photographer but a long time queer activist, Muholi asks in their images how far we are prepared/ able to go to detach Black (and queer) representations from the historic voyeuristic repository of the western gaze. They seem to be creating a new grammar outside the binaries of black/white, heterosexual/homosexual that more accurately depict the experience of individual lives. An emphasis on exteriority gives voice to hidden interiorities.

Not all the subjects are regal. Muholi depicts young women binding their breasts with bandages and having sex, naked bodies lying lovingly entwined on tousled beds and Black queer individuals – both trans men and trans women – taking pride in beauty pageants and photo shoots. A particular influence on Muholi’s work was that of Joan E. Biren, a photographer associated with the second-wave of feminism and gay liberation in the 1970s. Biren’s credo was ‘collaboration, not domination,’ an approach that defines Muholi’s own photographic position. There’s an insistence on ‘participant’ rather than viewing the other as a ‘subject’, of giving voice and agency to the lesbians, gender non-conformists and trans men who appear in these photographs. In this work, Muholi continues the slow repositioning of black women within the art arena championed by artists such as Maud Sulter and Lubaina Himid.

Christian missionaries implanted the belief that homosexuality was un-African. Research has shown that binary notions of gender and sexual relationships were, to some degree, enforced by colonial powers. For Muholi’s participants, seeing themselves portrayed has often been both healing and transformative, bringing lives that may have been lived unwillingly in the shadows into the light. Muholi’s unflinching eye challenges the dominant views that surround not only transphobia and racism but the lives of all those disenfranchised and pushed to the margins. In so doing this remarkable body of nuanced, strong and compassionate work re-writes the visual history of South Africa, as well as challenging how we look at art.