Following the inaugural UK retrospective of Spanish artist Enrique Brinkmann, The Poetics of Silence in 2011, which featured works covering a span of 50 years, rosenfeld porcini presents Painting in Space – The Dilemma of Gesture, a new exhibition showcasing the artist’s most recent work. 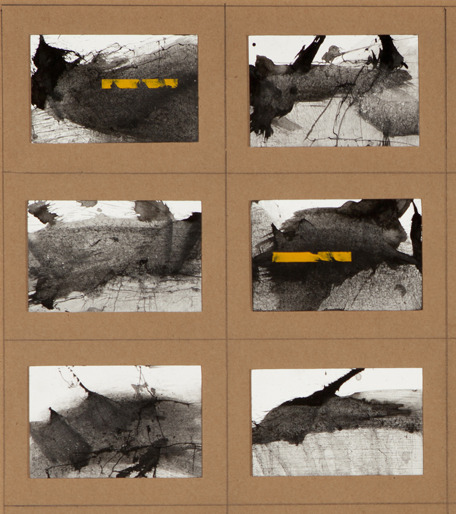 This exhibition marks a point of departure for Brinkmann, as the artist presents for the first time two sculptural pieces Estela (2013) and Cuatro Estudios de Sonajero Chino (2011). Brinkmann also introduces the extraordinary series on paper Reportajes(Reporting, 2013), which recalls his black and white period from 1961– 1974, when Franco was ruling in Spain.  Due to the political situation in his country at that epoch and being a lifelong committed socialist, his primary concern was with narrative. There was a sense of foreboding in all the paintings he produced in those years. Since the death of Franco, he has been concerned above all with formal language.  With Reportajes, Enrique Brinkmann has returned to black & white, managing to create a perfect symbiosis between his need for narrative and for his formal experimentation; his extreme sense of aesthetics extending as far as designing the complex pressed cardboard frame around the work. Here, Brinkmann no longer deals with specific political issues but rather presents a more philosophical approach to human drama. The series is completed by the sculpture Estela, which is, in effect, a three dimensional approach to what is happening in the paper works.

The four pieces from Cuatro Estudios de Sonajero Chino, which are in fact freestanding partially painted steel mesh, shift the artist’s practice into the realm of sculpture. With these works, Brinkmann accentuates both the gestural paintings, which have dominated his practice in the last years, and the transparency, which was the initial instigating factor leading the artist to abandon conventional mediums and use this very unique surface since 1998.

The final part of the show will feature a selection of Enrique Brinkmann’s latest paintings on steel mesh, where he continues to explore the idea of using the metal weave as a form of sculptural relief. Working the paint from both sides, sometimes even having as many as three different layers, enables the artist to produce extremely complex pieces. Elements constantly seem to appear and disappear under the multiple layers of paint.  Brinkmann persists in developing his recent love for gesture. After a lifetime of carefully considered and meditative paintings, he has now discovered the freedom of spontaneously applying paint. If one compares a painting from the early 60’s to a recent piece, it is almost impossible to recognize they were produced by the same hand; looking at his constant development, Brinkmann appears to have proceeded with a great sense of logic, both on an intellectual and painterly level.

For the first time also, rosenfeld porcini will present a selection of Enrique Brinkmann’s graphic production. This is yet another departure from both the drawings and oil paintings; these delicate works on paper display a unique attention to the possibilities of these particular practices, whilst presenting us with another facet of his passion for mark-making.

Enrique Brinkmann is in essence a quintessentially European artist. His art is steeped in both the traditions of his country and in the whole history of Western art. Like all great painters, his pictures are primarily about language; when one looks at his works ­– particularly post 1998, the originality of his approach and his unique poetic vision are immediately visible. Brinkmann has spent his whole artistic life pushing the boundaries of his art, while at the same time remaining totally true to his very particular vision.

Notes to the editors

b. 1938, in Malaga, Spain. Enrique Brinkmann abandons his training as an industrial engineer (1955) to focus on painting. The artist is self-taught and exhibits for the first time in Malaga, in 1957. He later joins the Picasso group and collaborates with the M.A.M. (Artistic Mediterranean Movement). Between 1961 and 1966 Brinkmann lives in Germany, residing in Cologne and Berlin. He travels periodically across Europe; this leads him to collaborate with the Fluxus Group, illustrating a music score for experimental composer Cornelius Cardew. As of 1967, the artist permanently relocates to Spain, living between Malaga and Madrid.

Enrique Brinkmann has exhibited with numerous museums and galleries in Spain and internationally including at the Bronx Museum of the Arts, New York; the Museum of Modern Art, Johannesburg; a retrospective at The Museum of Malaga and the Reina Sofia Museum, Madrid (formally MEAC). His work is featured in numerous private and public collections, such as the MoMA, New York; the Albertina Museum, Vienna; the Wallraf-Richartz-Museum, Cologne. In 1994 Brinkmann was given the “Premio Nacional de Grabado de la Calcografía Nacional” in Madrid (National Prize for Copperplate Engraving).